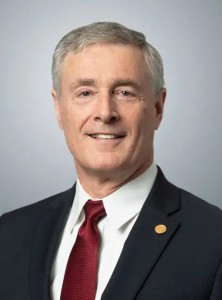 Plumb, a first-generation college graduate, is a native of Syracuse, New York, and earned his bachelor’s, master’s and doctoral degrees in electrical engineering from Syracuse University.

He began his academic career on the faculty at the University of Kansas in 1989. In 1998, Plumb became professor and chair of the Department of Electrical and Computer Engineering at the State University of New York at Binghamton and served in this role until 2005 when he was appointed dean of the Seaver College of Science and Engineering at Loyola Marymount University in Los Angeles. From 2014 to 2021, Plumb was executive vice president and provost at the University of St. Thomas in St. Paul, Minnesota.

His teaching and research interests span from applied electromagnetics to ground-penetrating radars. He has authored over 50 peer-reviewed journal and conference articles.

Richard and his wife, Mary, have three adult children and are proud grandparents.

After many months of happily anticipating and preparing to become Saint Mary’s 30th president, I’m so pleased to be on campus. I am honored and excited to be here.

During the past six months, I have had the opportunity to meet—albeit mostly virtually—with many individuals from across the College—Brothers, students, faculty, staff, Trustees, Regents, administrators, alumni, and donors—and I believe Saint Mary’s is truly a special and unique place. I look forward to spending the next several months getting to know you in person, listening and learning, so that we can envision and shape the next phase of Saint Mary’s success together.

Soon my wife, Mary, will be joining me as we settle into living on campus. We so anticipate having many opportunities to meet you all in person in the days ahead. We look forward to becoming a part of this wonderful community.