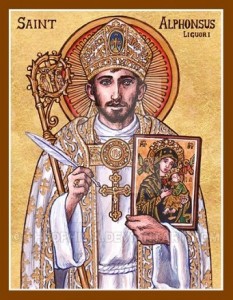 Memorial of Saint Alphonsus Liguori, Bishop and Doctor of the Church

Herod the tetrarch heard of the reputation of Jesus and said to his servants, “This man is John the Baptist.  He has been raised from the dead; that is why mighty powers are at work in him.”

Now Herod had arrested John, bound him, and put him in prison on account of Herodias, the wife of his brother Philip, for John had said to him, “It is not lawful for you to have her.”  Although he wanted to kill him, he feared the people, for they regarded him as a prophet.  But at a birthday celebration for Herod, the daughter of Herodias performed a dance before the guests and delighted Herod so much that he swore to give her whatever she might ask for.  Prompted by her mother, she said, “Give me here on a platter the head of John the Baptist.” The king was distressed, but because of his oaths and the guests who were present, he ordered that it be given, and he had John beheaded in the prison.  His head was brought in on a platter and given to the girl, who took it to her mother.  His disciples came and took away the corpse and buried him; and they went and told Jesus.

Let it be clear, then, in all your conduct toward the children who are entrusted to you, that you regard yourselves as the ministers of God, carrying out your ministry with love and a sincere and true zeal, accepting with much patience the difficulties you have to suffer, willing to be despised by men and to be persecuted, even to give your life for Jesus in the fulfillment of your ministry.

The zeal that ought to inspire you is meant to give you these dispositions, so that you recognize that it is God who has called you, who has destined you for this work, and who has sent you to labor in his vineyard.  Do this, then, with all the affection of your heart, working entirely for him.

Eternal Father, your Son gave himself fully to his ministry even though he knew that it would end in rejection and pain.  Sadly, his word is no less misunderstood and opposed today.  Grant to us the courage and resilience to be faithful disciples with the zeal to continue to build your Kingdom.  May we be in our struggle for truth a sign of your presence and redemption in our world.  We ask this of you who lives and reigns with your Son and the Holy Spirit, one God, forever and ever.  Amen.