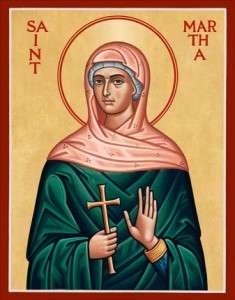 Jesus entered a village where a woman whose name was Martha welcomed him.  She had a sister named Mary who sat beside the Lord at his feet listening to him speak.  Martha, burdened with much serving, came to him and said, “Lord, do you not care that my sister has left me by myself to do the serving?  Tell her to help me.”

The Lord said to her in reply, “Martha, Martha, you are anxious and worried about many things.  There is need of only one thing.  Mary has chosen the better part and it will not be taken from her.”

Nothing is more admirable than the faith Saint Martha showed when Jesus raised Lazarus to life. She told Jesus that if he had been with her when her brother was ill, he would not have died, that she knew that God would grant him all that he would ask, and that if he wished to bring her brother back to life, he could easily do it. But when Jesus told her that her brother would indeed rise again, she declared that it was true that he would rise at the time of the general resurrection. When Jesus added that he was the resurrection and the life and that those who believed in him would live and never die, he asked her if she believed this, and she answered, yes, that she did believe that he was the Christ, the Son of the living God who had come into this world. This answer, which was the same answer of Saint Peter that Jesus Christ had so highly praised, deserves very special veneration because of the great faith it shows.

Eternal Father, Jesus came to us as your gift to restore us to life.  In the busy-ness of our days, we sometimes can ignore gifts or set them aside, unacknowledged and unopened.  Help us to overcome our distractions and worries so that we will hear and see you when you call on us.  We pray for the wisdom to know when to quiet ourselves and rest in your presence.  We ask this of you who lives and reigns with your Son and the Holy Spirit, one God for ever and ever.  Amen.