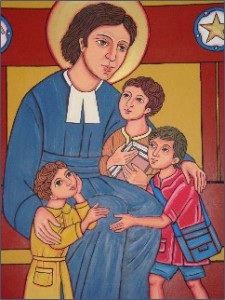 Intention: That God, through the intercession and example of Saint John Baptist de La Salle, Patron of Teachers, will raise up Christian educators ready to devote themselves wholeheartedly to the human and Christian formation of the young.

Jesus said to his disciples: “This is my commandment: love one another as I love you.  No one has greater love than this, to lay down one’s life for one’s friends.  You are my friends if you do what I command you.  I no longer call you slaves, because a slave does not know what his master is doing.  I have called you friends, because I have told you everything I have heard from my Father.  It was not you who chose me, but I who chose you and appointed you to go and bear fruit that will remain, so that whatever you ask the Father in my name he may give you.  This I command you: love one another.”

What a consolation for those who have procured the salvation of souls: to see in heaven a great number whom they have helped to obtain the advantage of enjoying so great a happiness!  This will happen to those who have instructed many people about the truths of religion, as an angel said to the Prophet Daniel: Those who instruct many people in Christian justice will shine like stars throughout all eternity.  They will shine, indeed, in the midst of those whom they have instructed, who will eternally bear witness to the great gratitude they have for so many instructions they received from their teachers, whom they will regard as the cause, after God, of their salvation.

O God, who for the Christian education of the poor and for the preservation of youth in the way of truth raised up John Baptist de La Salle, and did form by him a new religious family in the Church, mercifully grant that, through his intercession and example, we may be animated with zeal for Your glory in saving souls, and merit to share in his crown in heaven. Amen.