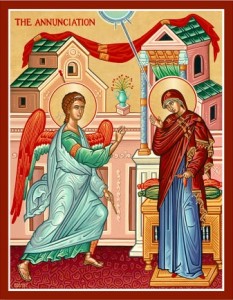 Solemnity of the Annunciation of the Lord

The angel Gabriel was sent from God to a town of Galilee called Nazareth, to a virgin betrothed to a man named Joseph, of the house of David, and the virgin’s name was Mary.  And coming to her, he said, “Hail, full of grace! The Lord is with you.”  But she was greatly troubled at what was said and pondered what sort of greeting this might be.  Then the angel said to her, “Do not be afraid, Mary, for you have found favor with God.

“Behold, you will conceive in your womb and bear a son, and you shall name him Jesus.  He will be great and will be called Son of the Most High, and the Lord God will give him the throne of David his father, and he will rule over the house of Jacob forever, and of his kingdom there will be no end.”  But Mary said to the angel, “How can this be, since I have no relations with a man?”  And the angel said to her in reply, “The Holy Spirit will come upon you, and the power of the Most High will overshadow you.  Therefore the child to be born will be called holy, the Son of God.  And behold, Elizabeth, your relative, has also conceived a son in her old age, and this is the sixth month for her who was called barren; for nothing will be impossible for God.”  Mary said, “Behold, I am the handmaid of the Lord.  May it be done to me according to your word.” Then the angel departed from her.

In many parishes these days one can come across a popular Lenten poster that reads, “If giving up chocolate has left us longing for chocolate rather than for God, perhaps this would be a good time to reassess.”  With apologies to the many children (of all ages) for whom abstaining from favorite foods can be a near-Herculean feat, the suggestion that we examine our basic assumptions about Lenten sacrifice could be a helpful one.  Specifically, we could look at what spirit should animate our decision to sacrifice.  And for this, we have the example of Mary, the Mother of God.

When contemplating Mary’s selflessness in accepting God’s will that she be the Mother of God, we must not forget the earthly implications of her decision.  She had just been told that she was to be with child in a time and place where, for a woman who had yet to marry, this could mean exile or death.  To agree to face the trial that was sure to come would have been an extraordinary choice for anyone, let alone for a confused and unprepared teenage girl.  It is doubtful that she could have done this unless she already believed that her life belonged to more than just her and was meant to do more than just what she wanted.  This intense picture of heroic faith in the midst of human vulnerability speaks directly to the heart of personal sacrifice: a willingness to give away one’s own self.

The author James Hollingworth, aka Ambrose Redmoon, once wrote, “Courage is not the absence of fear, but rather the judgment that something else is more important than one’s fear.”  Mary’s courage was such that she was able to open herself to concerns and possibilities beyond her own.  Such openness can connect us to the realities of human brokenness and our responsibility to one another for its healing.  The Lenten call to sacrifice may begin as an exercise in deciding to what we are prepared to say no, but ultimately it must serve as a path on which to discover to what we are being called to say yes.

Eternal Father, you sent your Son to us through the selflessness of the Blessed Virgin Mary.  Her yes to you is for us the model of faith and humility to which we all should aspire.  May we always seek to be your ambassadors in the world, following in your ways by working to build your Kingdom. We ask this of you who lives and reigns with your Son and the Holy Spirit, one God forever and ever.  Amen.