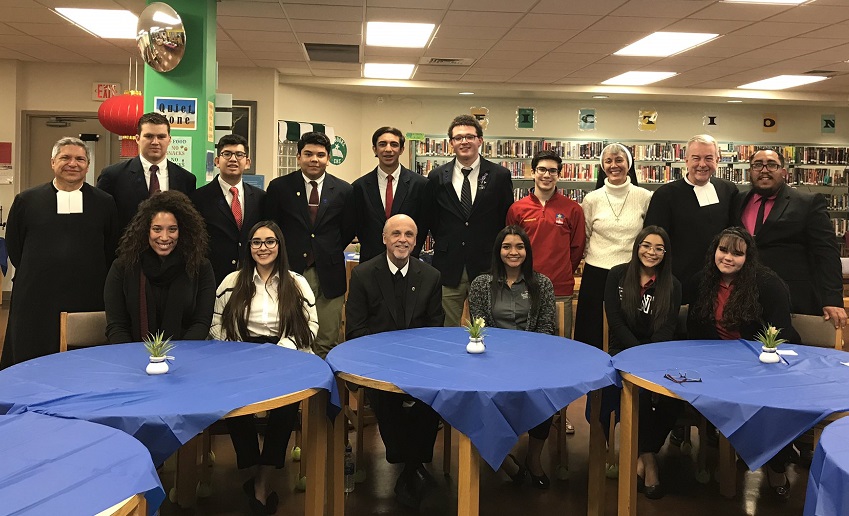 Superior General Robert Schieler (front row) at his visit to Cathedral HS, joined by a group from San Miguel HS.

At a reception at the school, Brother Robert spoke to the faculty – staff and board members. He pointed out how Lasallians empower their students to change the world and thanked everyone for the important role they play in the formation of the students entrusted to our care.  The first day was rounded out with dinner and prayer with the Brothers community.

The second day began with a breakfast meeting with students from Cathedral High, as well as a group of students and faculty from San Miguel High School, Tucson, Arizona, who are involved with the El Otro Lado (EOL) border immersion program.

Students outlined and explained the distinct EOL experience at both sites. Students then had a question and answer period with Brother Robert. They expressed their appreciation for a newfound awareness of border issues and their passionate commitment to being part of a positive change. Many described how their faith life had grown as a result of their involvement in this program. Brothers Robert and Timothy praised the students for being willing to venture out of their comfort zone and helping others to do the same. 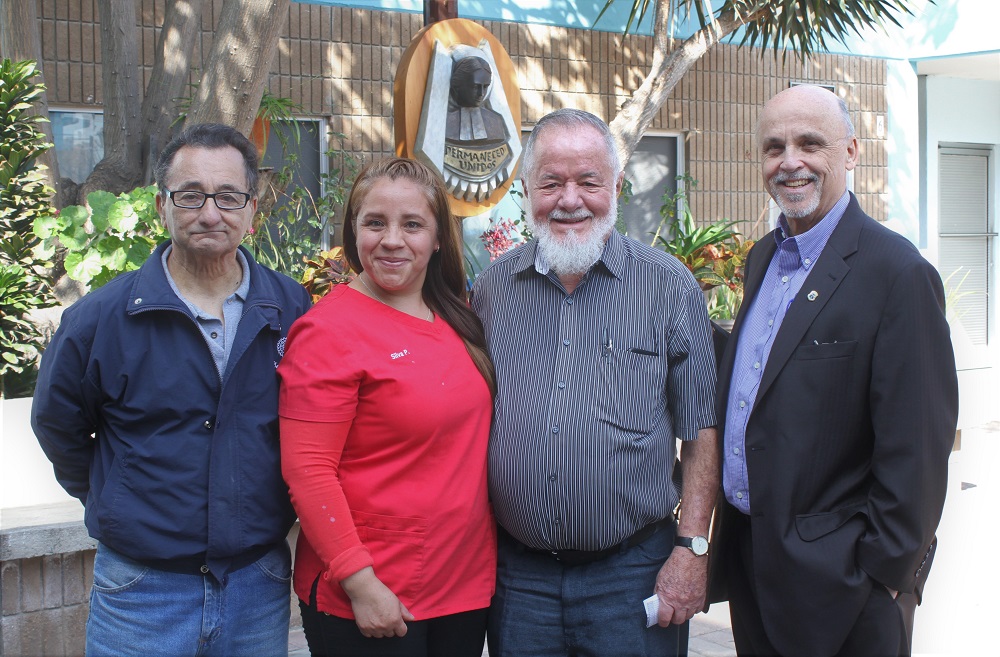 Br. Robert with Centro director Br. Francisco Hernández    (to his right) and members of the Centro faculty-staff.

That afternoon, Brothers Robert, Tim, and Nick traveled to San Diego, California and then on to Centro de Formación Integral La Salle in Tijuana, B.C., Mexico.  Centro is a youth and adult learning center that is co-sponsored by SFNO and Distrito México Norte.  The Brothers enjoyed a quiet evening meal with the local Brothers after their long day.

The next morning, day three of the visit, Brother Robert joined the community for prayer and Mass at a local parish. He then visited Centro, his first-ever visit to this ministry.  Brother Francisco, the director, toured him around the small campus and they dropped by many classes.  Brother Robert was impressed by the large variety of course offerings, the generous commitment of the teachers, and the excitement by the students.

Later, there was a gathering of former students, benefactors, and teachers to formally welcome Brother Robert.  In his remarks to the group, the Superior General pointed out how many similarities Centro had to the origins of the Brothers: a commitment to gratuity, great faith expressed in action, an invaluable group of women who supported the educational works financially, the assistance of supportive clergy, and a response to a real need. The transformational aspect of the Centro’s culture made a deep impression on Brother Robert.  This session ended the visit to Centro.

Superior General Brother Robert Schieler, FSC, announced on March 5, 2020, that he and RELAN Brother Timothy Coldwell have suspended the remainder of the Pastoral Visit to the San Francisco New Orleans District.

“Since our arrival in the United States,” Brother Robert stated, “Brother Timothy and I have monitored the growing concern over the spread of the COVID – 19 virus. After prayerful reflection and in consultation with Brother Donald, Visitor, we have decided to cancel our visit to the District of San Francisco New Orleans. We reluctantly make this decision out of both an abundance of caution and fraternal concern for the wellbeing of all.”

The Brothers have indicated that rescheduling the SFNO Pastoral Visits is a possibility. However, nothing definite has been decided at this time.