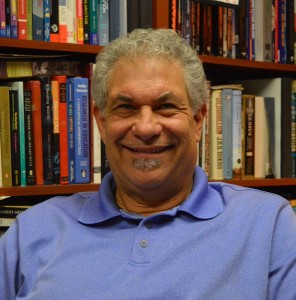 Affiliation is a formal recognition and acknowledgement extended by the Brothers of the Christian Schools to those persons who have supported the Brothers in their work, not only through outstanding gifts and services, but also through their professional, personal and fraternal relationship with them.  In presenting to them Letters of Affiliation, the Brothers welcome and celebrate affiliates as honorary members of the Institute.

Professor Tywoniak began his association with the Brothers as a student at Saint Mary’s College of California in Moraga, where he would graduate in 1975 with a Bachelor of Science degree in Psychology.  He later would earn an MFA in Electronic Music Composition from the Center for Contemporary Music at Mills College, and a doctorate in Educational Leadership and Technology from the Institute for Catholic Educational Leadership at the University of San Francisco.

Starting his teaching career at Saint Mary’s Grammar School at Mont La Salle, Napa, California, Professor Tywoniak would in time return to Saint Mary’s College for what would be a forty-year career on the faculty in the School of Liberal Arts, eventually serving as chair of the Communication Department and also as director of the W. M. Keck Digital Studies Laboratory.  He retired in 2019.

A prolific author and lecturer, Professor Tywoniak has written and lectured on a broad array of topics, including the effects of mobile mediation on contemporary society, social movements of the 1960’s, the cosmology of Australia’s indigenous peoples, Pythagoras and the classical Quadrivium, 3D technology and the making of the movie Avatar, and the audio technology of the Grateful Dead. He is co-author of the undergraduate Communication textbook, Communication and Social Understanding (Kendall Hunt, 2009), and is the past editor of ETC: A Review of General Semantics.

In addition to his impressive reputation as a professor and scholar, Professor Tywoniak is equally well-known and respected for his collaboration with the Brothers and contributions to the Lasallian educational mission.  Distinguishing himself with his care and attention to his students, colleagues, and work, he has long been recognized as a faithful and effective steward of the Lasallian charism.  In announcing the Brothers’ decision to affiliate Professor Tywoniak, Brother Donald stated, “Ed has been one of the champions of the Brothers’ educational mission and did much during his tenure to spread its tenets to his peers at the College through the many positions of faculty leadership he has held.”

NOTE:  In light of the current COVID-19 pandemic, the presentation of letters of affiliation to Professor Edward Tywoniak originally scheduled for Saturday, April 18, 2020, at Saint Mary’s College, Moraga, will be rescheduled for date still to be determined.  The District will announce the new date when it is set.