This past summer, two Lasallian educators from the San Francisco New Orleans District (SFNO) embarked on a professional and personal adventure as participants in a District program that took them beyond both geographical and cultural borders and into a new experience of the Lasallian mission. 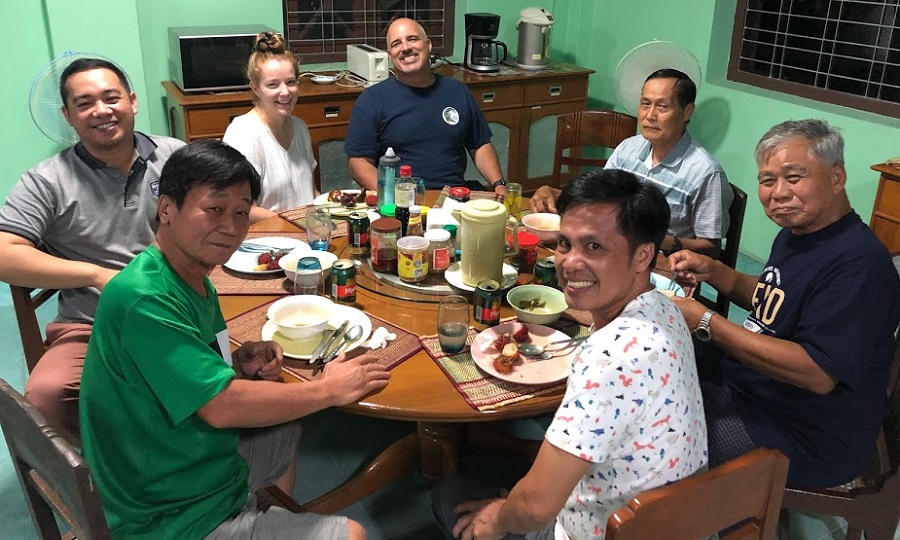 Whitney Strouse is Community Life Coordinator at La Salle College Preparatory in Pasadena, California.  She also is a member of the school’s Class of 2007.  Paul Havey is a Religion Studies teacher at Christian Brothers High School in Sacramento, California, and a 1981 graduate of the school.  The days of June 16 – July 12, 2019 found the two of them in the Southeast Asian country of Myanmar as part of SFNO’s Vandhu Paaru immersion experience.

Vandhu Paaru is an annual Lasallian adult immersion program begun in 1999 as a joint effort of the District of San Francisco New Orleans, the Lasallian East Asia District, the Delegation of India, and the District of Colombo.  Set in the Institute’s Pacific-Asia Region (PARC), Vandhu Paaru provides Lasallian educators with the opportunity to experience the Lasallian mission in developing nations by sharing in the work and daily living of the local Brothers and Partners.

Strouse’s and Havey’s journey began this past spring when they attended an orientation in preparation for the program.  Then they began their adventure, traveling to La Salle Learning Centre in Yangon in southern Myanmar.  For the next month, their time would be spent living in the Brothers’ Community, teaching the Centre’s students, working on construction projects around the campus, and generally settling into the daily rhythms of their new surroundings. 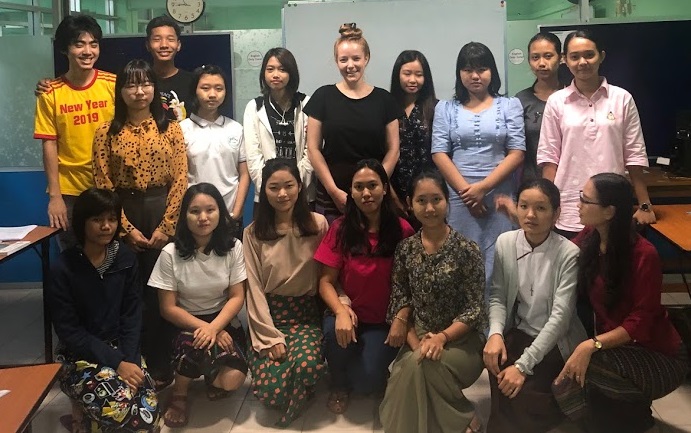 True to its name – Vandhu Paaru means “come and see” in the Tamil language – the immersion offered its SFNO participants many opportunities to expand their knowledge of and perspectives on life in other parts of the world.  As Strouse and Havey recently shared, their impressions were at times light-hearted, at times profound, and almost always enriching.

“When I first arrived,” Strouse said, “I was struck with how green and lush everything was. I also learned that there is no limit to the amount of stuff and people you can fit on a motorcycle.”

Havey’s initial thoughts were of being a newcomer.  “I felt a little nervous and anxious about what the experience was going to hold for me,” he recalled, “but right from the beginning people were very kind to me even though there was a definite language and cultural difference.”

The educators’ first days at work called for the usual adjustments that one might expect from a new learning setting, along with some unexpected realizations.

“I’ve not been a teacher,” noted Strouse, who taught conversational English while at the Centre, “but this experience really showed me how much I truly enjoy teaching.  Working with the students and brothers and learning about their country from them was greatly satisfying.”

A seasoned classroom veteran, Havey nonetheless had a similar awakening.  “I never really taught ELL students before,” he shared, “so it stretched my capacity to teach.  Four weeks really allowed me to be a part of the culture and people.  I initially struggled in my teaching, but I was able to quickly adapt.” 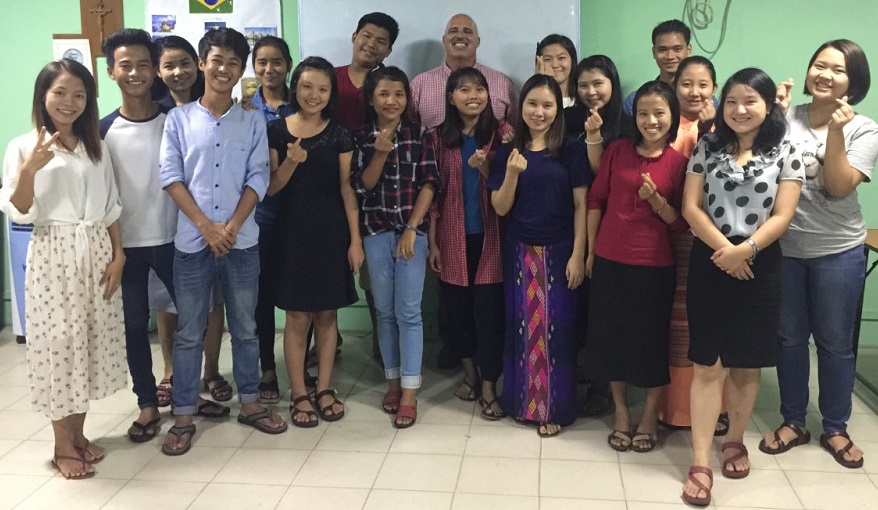 Over time, day-to-day living would unpack for its participants the rationale behind Vandhu Paaru, as it invited them to take in and reflect upon the universal character of the Lasallian mission.

“To experience the Lasallian mission at a global level enriched my life greatly,” Havey observed.  “It opens your eyes to the beauty of other cultures.  Amazingly, I felt the same warmth from the students in Yangon as I do in my high school in Sacramento.”

Strouse added, “I saw how big the Lasallian mission actually is.  It was amazing to see the Brothers fully living the mission every place we visited.  Seeing and hearing first-hand about working to live and fulfill the mission despite great difficulties was amazing.”

There would be other surprises for Strouse and Havey.  One was the impact on their own faith and spirituality of living in a culture where Christianity is not the predominant religious tradition.

“Being around a culture that is 90% Buddhist,” Havey reflected, “left me with sense awe and respect for the sacredness and individuality of their time of prayer and worship in the temples.  Strouse added that, “You can still have a Catholic religious experience surrounded by Buddahs.”

Another was the value of crossing personal and geographical boundaries in order to better understand the world.  For Strouse, it was about coming to a greater understanding of Myanmar itself, while Havey was struck most by the relational fabric of its society. 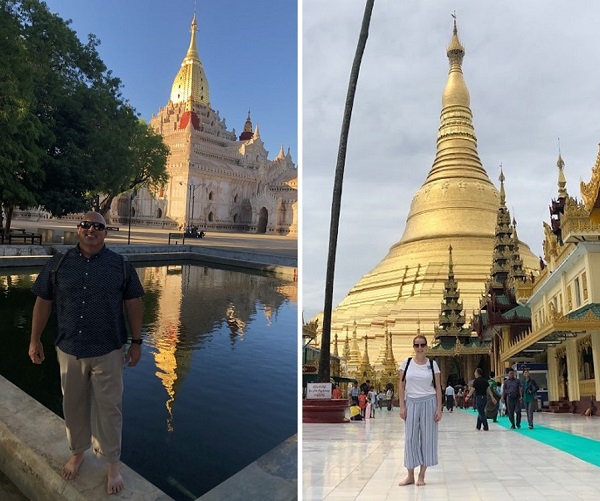 “Before going to Myanmar,” said Strouse, “I knew as much as Google searches and Instagram browsing would allow.  I learned so much about Myanmar, it’s history, its problems, its successes and people from first-hand information.  This is the best way to learn about a place.”

“The people of Myanmar are the kindest, most respectful people,” Havey offered.  “They go out of their way to be friendly and courteous.  We were able to visit many temples and sights which fully embraced their predominantly Buddhist culture.”

Asked what might be their most memorable take-away from their month of Vandu Paaru, Strouse and Havey gave almost identical answers.

“Working with the students and Brothers and learning about their country from them,” Strouse said. “The insight I gained from being able to ask questions of people who were so open and happy to share about their country, culture and experiences was incredible.”

“My greatest satisfaction,” concluded Havey, “was working with the students who were very open to their education and took the opportunity to learn about my culture. In the process I learned much about theirs. They educated me.  It was a blessing.”

Perhaps the most lasting and significant effect of Vandhu Paaru throughout its history has been its ability to show SFNO Lasallians how the Mission reaches all parts of today’s world, touching both the lives of those in need as well as the hearts of those who are called to live and work in solidarity with them.  And as two SFNO Lasallian educators found this summer, a world of discovery lies in the simple invitation, “Come and see.”