A Lasallian’s Experience of Working for Justice in the Borderland

A Lasallian’s Experience of Working for Justice in the Borderland 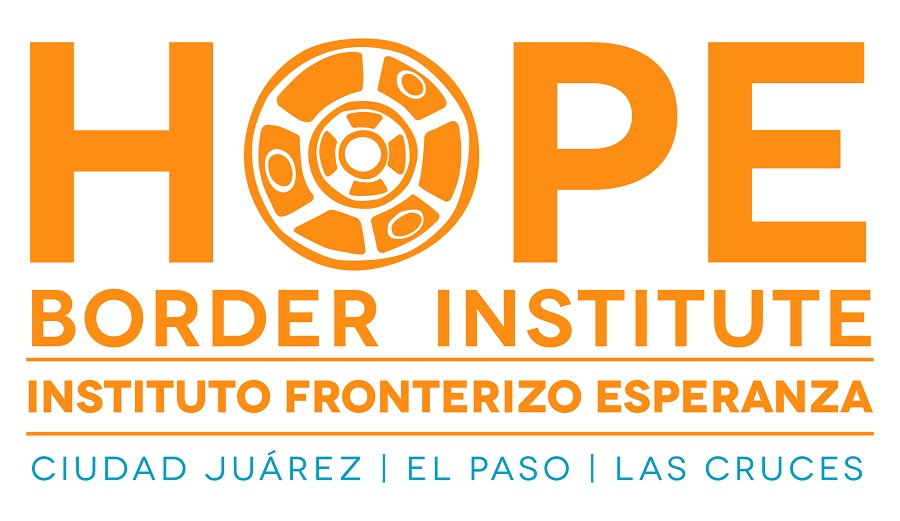 Before the end of 2015 and in preparation for Pope Francis’ visit to Ciudad Juarez, Chihuahua, Mexico, an event called Encuentro Fronterizo – Border Encounter – was held by a group called Hope Border Institute (HOPE). This event was attended by Father Alejandro Solalinde, a priest and human rights activist from Mexico.  It was here where I had my first experience with HOPE.

HOPE is a grassroots community action organization in the El Paso, Texas – Ciudad Juarez – Las Cruces, New Mexico borderland that, through a program of research and policy work, leadership development, and action, brings the perspective of Catholic social teaching to bear on the realities unique to our U.S.-Mexico border region.

I approached a member of the HOPE team and I told them that I was very interested in getting involved with them.  I started attending meetings, participating in their campaigns, and expanding my understanding of subjects that have included Catholic Social Teachings, the right to vote, and the U.S. government’s Operation Streamline zero-tolerance initiative. 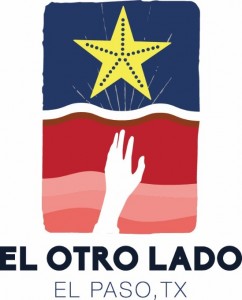 I also participated in Hope Border Institute’s first Border Leaders Academy, after which I served as part of the team that organized and led the following Leaders Academies. I have served at the annual Border Mass, traveled to San Antonio to talk about the reality of the borderland, and worked on numerous other projects.

HOPE is also a community partner and presenter for our San Francisco New Orleans District’s Lasallians Without Borders El Otro Lado border immersion experiences in El Paso. They are great friends whom I admire and from whom I have learned a lot. Actually, they are not only compañeros en la lucha – partners in the fight – but they also have become family.

It was a great meeting and learning experience: first, to see great mentors and friends; second, to meet people from different parts of the United States; and finally, to acquire the amazing knowledge offered by the different workshops and plenary presentations.

The Teach-In was attended by around 400 persons from New York, Chicago, California, Washington D.C. area, as well as local participants from El Paso and Ciudad Juarez.  These includes priests, religious men and women, students, scholars, social justice activists, and journalists.

The weekend began on October 11 with a beautiful prayer and song by Ilka Vega from Hope Border Institute.  The prayer reminded us that, Ubi caritas et amor, Deus ibi est – where there is love and kindness, God is present.  Then, Monsignor Bañuelas, who is from St. Mark’s Catholic Church in El Paso, and Dr. Lara addressed the issue of white supremacy, reviewing the history of how Latinx and Hispanic communities have come under racist attack in the southwestern U.S.  Monsignor Bañuelas reminded us that to end racism and white supremacy, we must do so with solidarity.  Monsignor also said that “solidarity must become more than mere acompañamiento.”

This first day of the Teach-in ended with a dinner full of joy and fellowship as Folklórico de San Marcos danced on the stage and mariachis sang it the lobby of ESC Region 19 Head Start, the event’s location on El Paso’s eastside.

During the Teach-In, I met with some great friends like the Most Reverend Mark J. Seitz, Bishop of El Paso; Wayne Romo from the Center for Life at St. Mary’s University of San Antonio, and Dr. Neomi de Anda an associate professor of Religious Studies at the University of Dayton, and current president of the Academy of Hispanic Theologians of the United States.  I also ran into friends and partners that have been part of El Otro Lado El Paso, like Monsignor Bañuelas; Dylan Corbett, director of Hope Border Institute; Dr. Nicholas Natividad from NMSU and graduate of Cathedral High School; Alonzo Mendoza, organizer for the Texas State Teacher Association and also a graduate of Cathedral High School; Lorena Andrade, Director of La Mujer Obrera in El Paso; and Jaclyn Ross, a Lasallian Volunteer alum and El Otro Lado assistant at San Miguel High School in Tucson.

October 12 was an intense day of workshops and presentations, with three break-out sessions where you could attend the talks that most interested you.  Each session had eight different presentations from which to choose.  I attended, Overcoming Racism: Resources for Faith Communities, as well as a second talk, Borderland Theology and Spirituality for Activism Today. 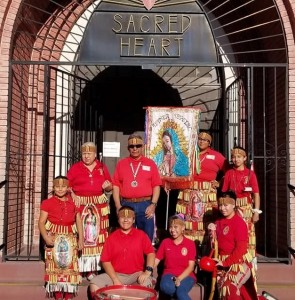 The first talk was a reminder of how we all have implicit biases, and how “racism denies salvation.”  In this talk, we learned how to speak up against certain racist comments or ideologies.  In the second talk, we were taught a modified version of Lectio Divina known as Visio Divina – “sacred seeing” – to meditate on the word of God, using different images of the Holy Family to meditate on what biblical stories are telling us about our life today.

That afternoon, the participants met at Sacred Heart Catholic Church in Downtown El Paso and, as the drums and danza de Matachines (a ritual dance performed by a traditional Mexican dance troupe) inspired us, proceeded for our public action at the U.S.-Mexico International Port of Entry.  There, the group was divided in two, with one group staying in El Paso to pray over the border wall place paper mâché flowers on it, while the other group crossed the international bridge into Ciudad Juarez.

When the Customs and Border Protection Officers (CBP) saw the second group crossing, approximately eight of them placed themselves at the front of the bridge, perhaps expecting a protest.  However, we all crossed peacefully and rather quickly and, as soon as we crossed, were able to see families that are now living along the margins of the international bridge due to the current Remain in Mexico Policy (MPP).  As our presenter pointed out, we were able to see asylum under attack.

After a moment of prayer, we all proceeded to form a line at the bridge and to make our way back to El Paso. The only difference was that we did it in a slower manner because each one of us used holy water to sprinkle and bless the international bridge by saying, “I bless this bridge for those who cannot cross it.”  We also attempted to escort a group of three families, a total of 15 persons, who were seeking asylum in the U.S.  Asylum-seekers are routinely turned away at the crossing.  Ten CBP officers were waiting in the middle of the bridge and barbed wire, and only one line of cars was open, but we succeeded, and the families passed through to continue their asylum application process in the U.S.

As CBP officers monitor bridge traffic, Teach-In participants pass in the                    background as they quietly bless the international bridge.

The Jornada ended on October 13 with a bilingual celebration of the Mass, celebrated by the Most Reverend Mark J. Seitz, Bishop of El Paso.  After the Mass, Bishop Seitz formally made the announcement of his new pastoral letter, Night Will Be No More, where he addresses the issue of racism and “the false god of white supremacy.”  The pastoral was written in memory of those who lost their lives on the August 3 massacre that took place in El Paso.  You can read the pastoral letter here: https://www.hopeborder.org/nightwillbenomore.

Later, Bishop Seitz presented Melissa Cedillo, a graduate student of Harvard Divinity School, and me with a signed copy of his new pastoral letter, this in appreciation for the work that young adults like ourselves are doing within the church and within our communities.  For this, all I can say is that I am extremely blessed to be considered a tiny light of hope in the city of El Paso.

We are living a very important time in history, a time in which migrants and Hispanic communities are being targeted and persecuted.  Fear, racism and xenophobia are so strong that now people are afraid to go out, feeling insecure for the mere fact of having a darker skin color.  I still remember the first time I went to Walmart in El Paso after what happened on August 3.  I would constantly turn around to look everywhere, and my senses were in fight-or-flight mode in case I had to run, hide or even fight. 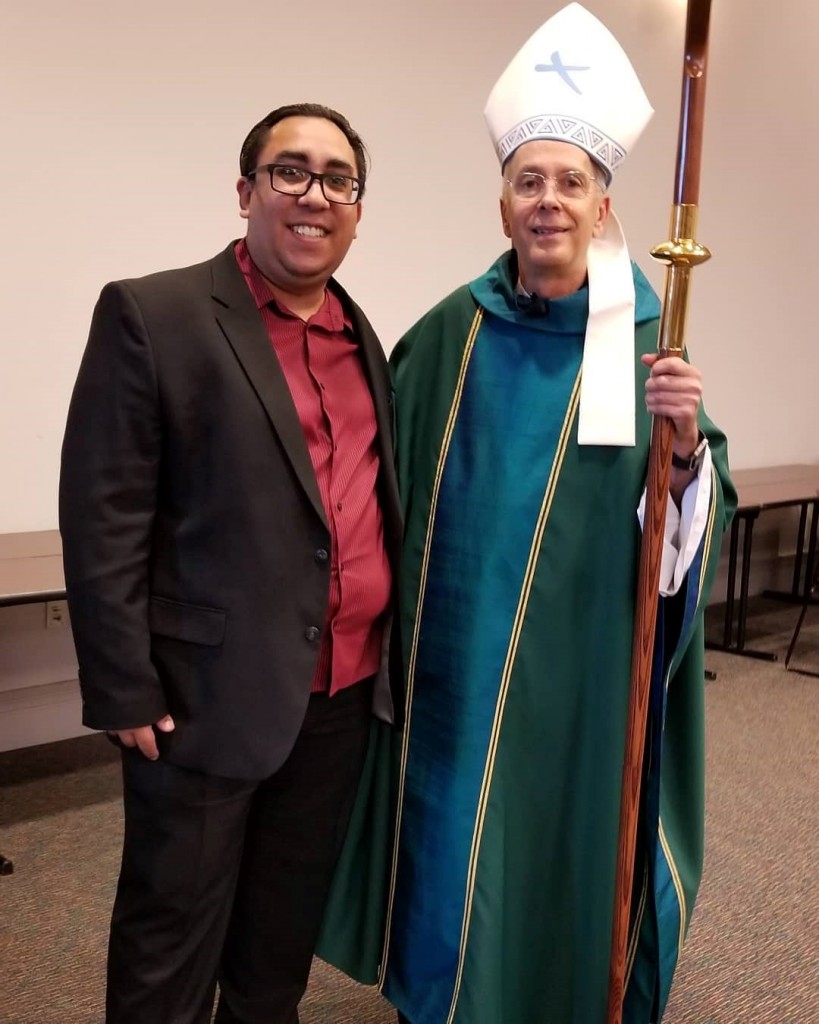 The status of migrants is one of the biggest social contradictions we have as a country.  Historically, we long have been dependent on Hispanic workers along our southern border, one example being the Bracero Program in which the U.S. brought over thousands of Mexican farm laborers during World War II.  We know that we need them to work in the fields, in construction, in cleaning services, and in other physically demanding jobs.  Yet, at the same time, we are being told that we have to be afraid of them and that they cannot be welcome in this country.

Together we must work for a more just, more human, and more supportive world.  It must be a world where everyone has the right to land, work, and housing, and where the dignity and human rights of people are valued and respected.  We all should remember that all of us are migrants in this world, a world that ultimately does not belong to any one of us, but to all of us together.