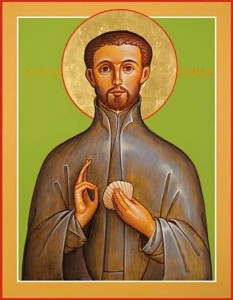 Intention: For God’s strength and protection for all who care for the world’s persecuted and dispossessed people, that their work may bear the fruits of comfort, peace, and justice.

On a certain sabbath Jesus went into the synagogue and taught, and there was a man there whose right hand was withered. The scribes and the Pharisees watched him closely to see if he would cure on the Sabbath so that they might discover a reason to accuse him. But he realized their intentions and said to the man with the withered hand, “Come up and stand before us.” And he rose and stood there. Then Jesus said to them, “I ask you, is it lawful to do good on the Sabbath rather than to do evil, to save life rather than to destroy it?” Looking around at them all, he then said to him, “Stretch out your hand.” He did so and his hand was restored. But they became enraged and discussed together what they might do to Jesus.

Because Guardian Angels are highly enlightened and know the good as it is, through them God makes known this good and the secrets of his holy will to those whom he has predestined to be his adopted children in Jesus Christ and by whom he has called them to be his heirs. By the light these angels share with those who are called, they teach them the good that must be practiced and what they must do to become heirs.

You must do the same thing for the children entrusted to your care. It is your duty to go up to God every day in prayer to learn from him all that you must teach the children and then to come down to them by accommodating them at their level in order to instruct them about what God has communicated for them to you in your prayer, as well as in Holy Scripture, which contains the truths of religion and the maxims of the holy Gospel.

Eternal Father, your Son taught that we should always seek first your Kingdom in all that we do.  Many times, we lose our way in a maze of contradictions and rationalizations.  Guide us to walk in the way of your wisdom, placing above all else your call to be humble of heart and ready to serve one another, especially those who are most in need.  May we look upon all things only through eyes of faith.  We ask this of you who lives and reigns with your Son and the Holy Spirit, one God for ever and ever.  Amen.