Not Just Another Game

Not Just Another Game

On August 25, 2019, in a northern Pennsylvania town called Williamsport, a baseball game was played.  Baseball games have been played regularly in our nation for two centuries.  And while this game was a championship game, there have been years of those, too.  So, in many ways, this was just another game.  That’s what two young men from Louisiana were telling themselves when the day began.  But by the time it ended, they discovered that they had hitched a ride with history. 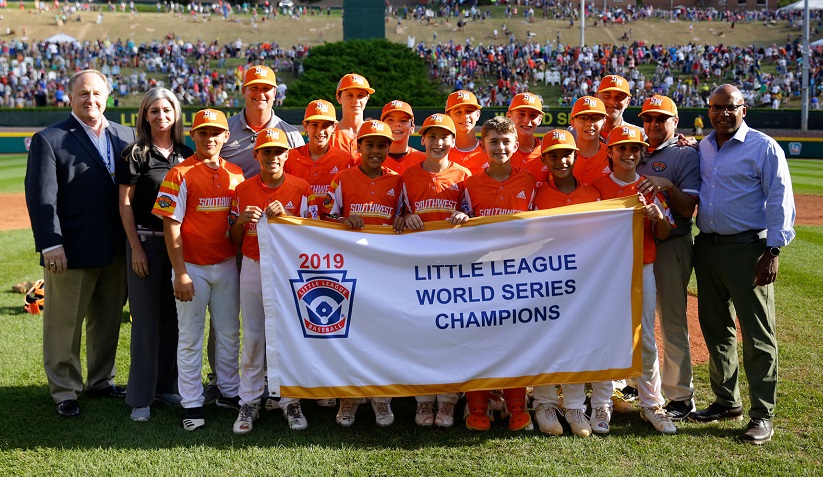 That day, Christian Brothers School students Ryan Darrah and Stan Wiltz were in the starting lineup for the Eastbank All Stars from River Ridge, Louisiana, as the team played for and won the 2019 Little League World Series.  The All Stars are the seventy-second team to win the championship and the first from Louisiana.

Representing the Southwest Region, the All Stars began the 11-day, 16-team Series with a disappointing loss, but fought back to win its next four games, including the U.S. championship, to reach the Series final.  Facing Curaçao, Lesser Antilles, from the Caribbean Region, Eastbank rolled to an 8-0 victory and the title.

For Ryan, the team’s centerfielder, and Stan, who plays shortstop, playing big travel games against formidable teams was nothing new.  However, the Series proved to be unlike any baseball trip that they had ever made.

“It was totally different from the tournaments that we normally travel to, where there’s you and some teams from a couple of nearby states,” Ryan explained.  “To actually play different teams from around the world…it’s really a world series.”

“And so, you’re playing for something much bigger,” added Stan.  “It’s a bigger championship game and there’s all these people watching.  It’s definitely more nerve wracking.”

Moving through the Series, a helpful constant was the confidence that the team’s 13 players had in themselves and in each other.  According to Stan, “We’d all played with and against each other for a long time and I knew how good everybody was.”  Ryan recounted, “At the start of the season, our coach told us, ‘I don’t blow smoke, and I’m telling you that you guys have a legitimate chance to win the whole thing.’” 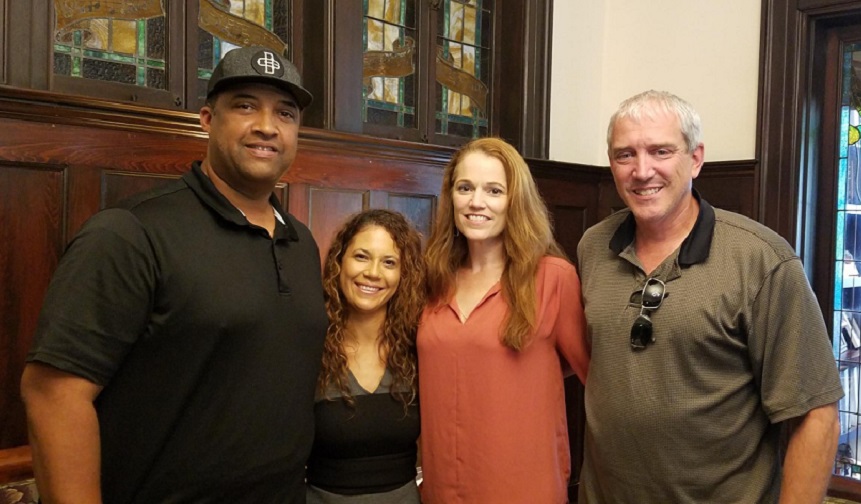 While able to take their game jitters and the big-stage media glare in stride, the public response that followed their team’s victory did catch the unassuming pair somewhat off guard.

“All the attention – the people, the parades – it’s pretty awesome, but I am a little surprised,” Ryan confessed with a shy smile.  Stan simply shook his head and said, “I did not expect this.  Not at all.”

The special Series experience was made even more so by Ryan’s and Stan’s Christian Brothers School bond.  Classmates as well as teammates on the school’s own baseball team, the pair enjoyed being able to share the championship experience with each other.

“It’s always been my dream to go to a Little League World Series,” Stan reflected.  “And then, not only did we win, but Ryan and I won together, and that’s like the cherry on top.”

Ryan nodded, “It meant a lot because we’ve been together for a long time and playing together in something as big as this was just crazy!”

It would mean a lot to their school as well.  As accustomed as Christian Brothers School is to its students distinguishing themselves through various achievements and successes, there is no denying that Ryan’s and Stan’s adventure has been something special for the school community.

“It’s been a unifying experience,” observed CBS president Joey Scaffidi, “because, much like sports teams can unify a city or Olympic teams a country, knowing that two of our own were there having this amazing opportunity brought everybody together.  It made it more personal for all of us.”

Added City Park Campus principal Michael Prat, “It was two kids who I could not have felt better about representing us on the national stage.  For us as their teachers, we knew it was a once in a lifetime experience and we wanted the best for them.  We’re all happy that it worked out the way that it did.” 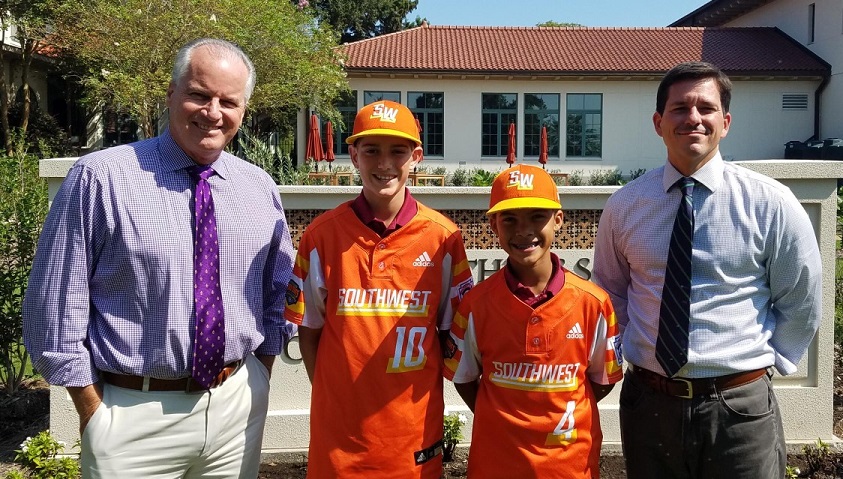 Ryan’s and Stan’s paths to South Williamsport began in their home community of River Ridge, a suburb of 13,500 residents about 20 minutes west of New Orleans.  Both of them joined Little League early and can still recall the moment that they fell in love with the game of baseball.

“I was around eight years old and we were driving to practice,” Ryan explains.  “I remember that something just clicked in my brain and I was so excited for that practice.  I was just so ready to get on the field.”

“When I was six,” Wiltz chuckled, “and I hit my first home run, it was the greatest feeling ever.  That’s when I started to love baseball more and more.”

Through all of this, there were Ryan’s and Stan’s parents, caring and vigilant, navigating a journey that was as new for them as it was for their sons.  They knew they were in one-day-at-a-time territory.

Stanley Wiltz, himself a former collegiate and minor league standout, mused, “You walk into the Little League Complex and you see the people from ESPN, Adidas, Easton there, and you think, wow, the kids have never played on this level.  As a parent, you hope you’ve instilled in them enough confidence and self-esteem, especially if they fail and have to bounce back.  You just want them to do well.”

“It was very surreal the entire time,” remembered Pamela Wiltz.  “After we won the U.S. Championship, it just took a minute for us to realize that we were there – the one-in-a-million chance for your child to have that opportunity.  So, it was, ‘Keep them grounded, keep us grounded, and embrace the moment.’”

While the team’s victory may have meant the end of the Series hoopla, it did not mean the end of the parents’ work in helping their children process such a major event happening in their young lives. 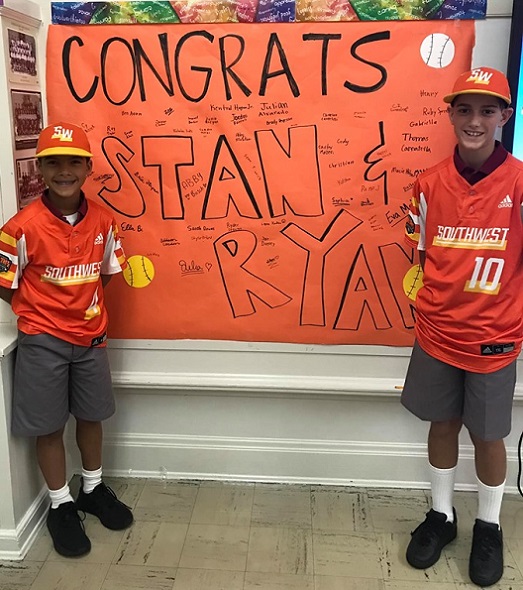 “The important thing at this point,” emphasized Kevin Darrah, “is that when all the notoriety and excitement is over with, we have to help them understand that it was just one part of life and to get ready for the next stage. Yes, this was huge, but don’t think that this was the peak of your life and it’s all downhill from here.”

In that respect, the parents are quick to acknowledge the welcome partnership that they have with Christian Brothers and the role that Ryan’s and Stan’s Lasallian education has been privileged to play in each young man’s personal formation.

“CBS is helping our boys grow up to be gentlemen,” Christine Darrah said. “I had a person at the Series come up just to compliment Ryan’s manners.  Another thanked me because he had befriended her son, who was a fan, when nobody else would.  It’s that kind of character that Christian Brothers is instilling in them.”

Now, as championship excitement settles, there is time to reflect on what might be the lasting takeaways from that August 25 afternoon and all that went with it.  Not surprisingly, Ryan’s and Stan’s teachers lean toward lessons learned and values affirmed.

“I approved the opportunity for them to go,” Scaffidi shared, “because of the life experience they would gain.  That mattered as much to me, if not more, then their chance to play and win baseball games.”

Prat agreed, “It has been less about what they accomplished and more about how they did it, and about watching how they made us all proud by the way that they conducted themselves and represented themselves, their families, their school, their country, and, I would say, their God.”

Meanwhile, Ryan’s and Stan’s parents are focused on what this all will mean for their sons’ futures.

“All of the sacrifice that Stan was willing to make paid off,” Pamela recounted.  “For him to experience this at such a young age, I hope that he can stay on track with that mindset.”  Dad Stanley suggested, “A lot of times adults tells kids that if you do this, you’ll get that, but you never get to actually measure it.  This was one time where kids actually got to see where it started and what happened when they did the right things.  I would like him to take that with him.”

Ryan’s father, Kevin, offered, “It would be the concept of teamwork.  Whatever you do that’s worthwhile, you’ll do with somebody else.  In the world of employment, to be successful, a lot of times when one struggles, another steps up.  Pick your teammates up and they’ll pick you up.”  And mom Christine concluded, “It’s on our wall: Henry David Thoreau’s, ‘Go confidently in the direction of your dreams.’  I’m proud that Ryan’s taking the road less traveled.  He’s focused on what’s at the end of that road, which is his dream of baseball, but it’s also God.”

As for the two champions themselves, their takeaways came from the simple places of youthful wonder and gratitude.

“Meeting all of the kids that we met,” Ryan said, “and getting to play on that beautiful field.”

“Knowing that I got to play in the Little League World Series,” says Stan.  “I’ll remember that for the rest of my life.”

In time, the banners and trophies and scrapbooks of that day will find their predictable resting places in display halls and family room shelves.  And the 2019 World Series final will be listed among all of the others that have been played.  Just another game, right?  Try telling Ryan and Stan that.

All photos SFNO Communications except where indicated.