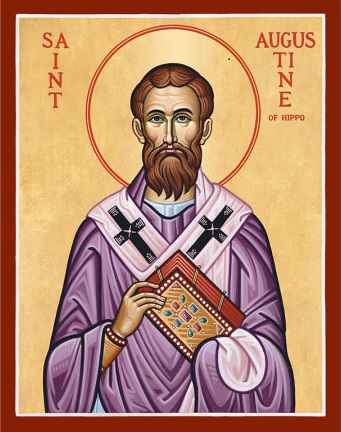 Memorial of Saint Augustine, Bishop and Doctor of the Church

Intention: For all who live in the darkness of poverty, violence, abuse, or neglect, that they may know the light of God’s comfort through our acts of solidarity.

Jesus said, “Woe to you, scribes and Pharisees, you hypocrites.  You are like whitewashed tombs, which appear beautiful on the outside, but inside are full of dead men’s bones and every kind of filth.  Even so, on the outside you appear righteous, but inside you are filled with hypocrisy and evildoing.

“Woe to you, scribes and Pharisees, you hypocrites.  You build the tombs of the prophets and adorn the memorials of the righteous, and you say, ‘If we had lived in the days of our ancestors, we would not have joined them in shedding the prophets’ blood.’  Thus you bear witness against yourselves that you are the children of those who murdered the prophets; now fill up what your ancestors measured out!”

Having become bishop of Hippo, Saint Augustine devoted himself with all possible zeal to the guidance of his diocese, but God did not restrict his zeal to so limited a field. Because God had given his spirit a generosity at least equal to the depth of his knowledge, God made him useful to the whole Church. Saint Augustine was consulted by Popes and Councils and by nearly everyone in the world, even by several unbelievers to whose conversion he contributed a great deal. From all sides, people came to him to ask for clerics formed under his guidance to become pastors of the Church. Yet, so holy a manner of life was strongly opposed and condemned by the heretics, who considered him as their greatest enemy, the one among the Doctors of the Church whom they feared the most. They said everything they could against him to ruin his reputation, but because it was founded on the solid base of piety and humility, they were never able to do him any harm. He showed, in fact, extraordinary humility in leaving an account of his sins to posterity.

Our Community can be very useful to the Church, but be convinced that it will be so only to the degree it is based on these two foundations, piety and humility, which will make it indestructible.

Eternal Father, we pray today for the grace of self-discipline.  Our real power as persons lives through our commitment to using our gifts wisely and well.  Help us to use this power to serve others, especially those most in need, working to build your Kingdom here on earth.  Grant us the wisdom and the will to make good choices and to be our best and truest selves.  We ask this of you who lives and reigns with your Son and the Holy Spirit, one God, forever and ever.  Amen.