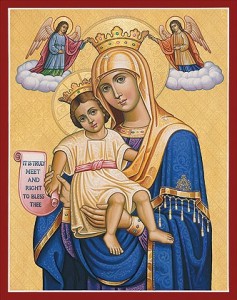 Memorial of the Queenship of the Blessed Virgin Mary

Intention: That God’s peace and wisdom will touch the hearts of all whose lives are ruled by confusion, anger, or fear.

Jesus again in reply spoke to the chief priests and the elders of the people in parables saying, “The Kingdom of heaven may be likened to a king who gave a wedding feast for his son. He dispatched his servants to summon the invited guests to the feast, but they refused to come. A second time he sent other servants, saying, ‘Tell those invited: “Behold, I have prepared my banquet, my calves and fattened cattle are killed, and everything is ready; come to the feast.”’ Some ignored the invitation and went away, one to his farm, another to his business. The rest laid hold of his servants, mistreated them, and killed them. The king was enraged and sent his troops, destroyed those murderers, and burned their city. Then the king said to his servants, ‘The feast is ready, but those who were invited were not worthy to come. Go out, therefore, into the main roads and invite to the feast whomever you find. The servants went out into the streets and gathered all they found, bad and good alike, and the hall was filled with guests. But when the king came in to meet the guests he saw a man there not dressed in a wedding garment. He said to him, ‘My friend, how is it that you came in here without a wedding garment?’ But he was reduced to silence. Then the king said to his attendants, ‘Bind his hands and feet, and cast him into the darkness outside, where there will be wailing and grinding of teeth.’ Many are invited, but few are chosen.

Do you believe, perhaps, that you are responsible for your disciples only during the time of school, that your vigilance need not extend to their behavior outside of school in order to help them, as far as you are able, to live everywhere in a Christian manner and not associate with bad companions during the entire time they are under your guidance?

Eternal Father, the busy-ness of our world often can tempt us away from being attentive to your presence.  When we look only to serve our own concerns instead of seeking your Kingdom, help us to turn away from being self-centered and to lift ourselves to better places.  May we make of ourselves a people of faithfulness and gratefulness, living our lives with compassion, care, and love.  We ask this of you who lives and reigns with your Son and the Holy Spirit, one God forever and ever. Amen.