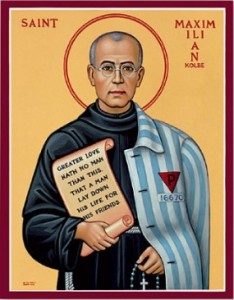 Intention: For God’s blessing on the new school year and our Lasallian mission of accompanying students in the sacred and urgent work of building the Kingdom of God.

Jesus said to his disciples: “If your brother sins against you, go and tell him his fault between you and him alone. If he listens to you, you have won over your brother. If he does not listen, take one or two others along with you, so that every fact may be established on the testimony of two or three witnesses. If he refuses to listen to them, tell the Church. If he refuses to listen even to the Church, then treat him as you would a Gentile or a tax collector.

Again, amen, I say to you, if two of you agree on earth about anything for which they are to pray, it shall be granted to them by my heavenly Father. For where two or three are gathered together in my name, there am I in the midst of them.”

Sometimes (Jesus) proposed as a happiness everything that the world holds in horror, like poverty, injuries, insults, slander, and every kind of persecution for the sake of justice, even telling his disciples that they ought to be glad and rejoice when such things happen to them.

At other times he inspired horror for the sins into which people ordinarily fall, or at other times he proposed virtues to practice, such as gentleness, humility, and the like.

He also made them understand that unless their justice surpassed that of the scribes and Pharisees (who bothered themselves about externals only), they would not enter the kingdom of heaven.