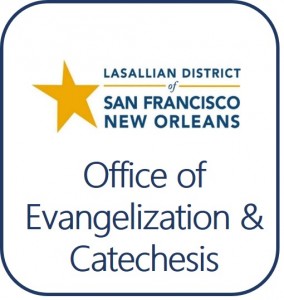 “A Catechist’s Conversation” is a series of posts by Charles Legendre, AFSC, Director of Evangelization and Catechesis for the District of San Francisco New Orleans.

Much has been written and will be written about Lasallian formation.  The Brothers and Partners have identified and reaffirmed through numerous gatherings at the local, District, Regional, and Institute levels that sustaining our Lasallian mission hinges on our ability to effectively engage in the process of “interiorizing the constitutive elements of Lasallian identity.” [1]

As a Lasallian family, we await the publication of Lasallian Formation for Mission: The Pilgrim’s Handbook, a document previewed by Brother Robert Schaefer from the Secretariat for Formation in Rome at our most recent LASSCA Conference.  This document will again express our prioritizing of formation, examine the contemporary context and offer some pathways forward.  As Lasallians, we have come to a broad, enduring consensus that formation is the key to our continued evolution and re-founding.

I would like to add my voice to the chorus of those who have reflected on this challenge of providing effective Lasallian Formation from the perspective of a summer packed with Lasallian formation experiences.  Below I list my summer formation activities.

June 5-7:  Engaging with the Lasallian world – a three-day formation program for faculty and staff at Saint Mary’s College of California.  Each day of the program is based upon one of the areas of focus of the Buttimer Institute:  the life of the Founder, Lasallian pedagogy and Lasallian spirituality.  The program is sometimes referred to on Saint Mary’s campus as “mini-Buttimer.”

June 13:  A meeting of DFAC, the District Formation Advisory Committee.  This committee has been formed by Dr. Greg Kopra to guide the efforts toward strengthening formation on the local level, a priority emerging from the District Mission Assembly of 2016.

June 24-28:  LSJI, the Lasallian Social Justice Institute.  This summer’s program was based in the Lower 9th Ward of New Orleans and focused upon environmental justice, particularly the issues surrounding coastal erosion in Louisiana.

June 30 – July 5:  The Buttimer Institute.  I had the opportunity to sit-in on the second week of the third-year classes on Lasallian spirituality led by Brother William Mann, FSC.

July 22-25:  VEGA at Christian Brothers University.  This was the second regional gathering of Young Lasallian Professionals (the first being at CBU in 2010).  “VEGA” is an Italian acronym for Vedere, Guidicare, Agiri – to “see, judge, and act.”  The VEGA program has been developed and offered consistently in the DENA District.  As stated previously, this is only the second time that it has been offered as a Regional program.

August 1:  New Teacher and Staff Orientation for New Orleans-area schools.  My close to my summer formation activities marked the start of the 2019-2020 school year.  This orientation provides teachers and staff new to a Lasallian ministry an overview of the Lasallian mission and family.  In the words of Fr. Claude Maréchel, this orientation provides new faculty and staff an introduction to “a story to enter, a language to speak, a group to which to belong, a way to pray, a work to undertake, and a face of God to see.”

Invitation
Invitation is a critical dynamic in the life of the Founder and in our Lasallian spirituality and – no surprise here – plays a central role in the effectiveness of Lasallian formation.  Invitation happens on several levels:

First, there is the invitation extended to the participant from the administration of the local school, ministry or agency.  In my conversations with the young Lasallian professionals at VEGA, several participants told me that they were honored to have been asked to attend. A few expressed some trepidation that they did not know exactly what attending VEGA would mean for them in terms of expectations back at home after completing the program but, on the whole, the VEGA participants were thrilled to be asked.  Others sought invitation.  Several of the LSJI participants, for example, had a great passion for environmental issues and approached their administrators to request to attend.

Within the invitation to approach the Lasallian charism is an entrée into the Catholic faith and the Gospels through texts and through the lives of those who provide a great witness.  In LSJI, for instance, the participants put the words of nature writers and environmentalists in conversation with the encyclical by Pope Francis, Laudato Si.  In Buttimer III, we were invited into faithfulness with Jesus Christ through the meditations written by Saint John Baptist de La Salle.  The invitation offered is to engage the faith and the God who inspired and sustained the Founder.

Displacement
Venturing into the unknown, facing a certain degree of insecurity sets the groundwork for growth.  As in nature, a disequilibrium in a system must exist in order for new life to happen.  As in the dynamic of invitation, the displacement that I observe in our Lasallian formation programs is experienced in several different ways:

There is the physical displacement which requires participants to leave the familiar and to enter into a new world.  For some, travel is a trial; for others – no sweat.  Despite what a person feels about travel, the participant must leave “here” and get “there.”  Although phone calls at breaks provide a reconnection at with family and work back home, the realization by participants that they are committed to a week or two in this program, in this city, provides a space where lives can be examined and new possibilities considered.

There is the displacement of role where participants are no longer teacher or administrator or social worker but student and pilgrim.  The participants are asked to assume a beginner’s mind to humbly engage with a religious reality.

There is a displacement of the locus of personal control in that the formation programs steer participants in structured presentations, prayers and reflections, conversations, and socials.  The ‘yes’ to the program is a ‘yes’ to the direction offered in the program and, in the sense of reaching for control, a ‘no’ to our personal agendas.

There is the displacement of focus.  Our formation programs are immersive experiences – times carved out to attend to particular themes or topics.  The programs are designed to integrate all of the elements in such a way as they point in singular direction.

Attention to Interiority
Our Lasallian formation programs invite reflection and dialogue which can be only entered into in an atmosphere of trust.  In our formation, we dare to ask entrance into that space of personal belief and spirituality and invite participants to trust the formation community enough to bring their sense of longing and belonging to light. The current formation programs follow in the lineage of our 300-year Lasallian tradition in education:

One cannot read the long history of the Conduct of Schools without noting the primacy of care and vigilance for the person. This care has always been
marked by an attention to the inner life of the maturing person. Through the centuries, this spirituality has informed a pedagogy of interiority. [2]

Throughout the summer, I was struck by the affirmation of the individual participant’s sense of spirituality and by an acceptance of the ways that people express that spirituality.  Certainly, our formation programs aim to put folks in conversation with our Lasallian Catholic tradition, but there is also the implicit and explicit acknowledgment that we have spiritual hungers and that we act on fulfilling those in our own lives.  The clearest example of this for me was a presentation offered by Gery Short on contemporary spirituality at the VEGA in Memphis.  In his presentation and in the dialogue of his session, young people had the opportunity to name how they expressed their spirituality – how they prayed.  Gery did a wonderful job of affirming the many ways that people pray that may not be readily recognized as prayer – riding a bike, jogging, sitting quietly on a porch, yoga, kissing their children goodbye in the morning – and the list went on.

Tracking the inner life of Saint John Baptist de La Salle through his life event’s and writings is invitational in itself.  Especially for those in Buttimer III who explored De La Salle’s spirituality with the guidance of Brother Tim Coldwell and Brother Bill Mann, I witnessed the Founder’s inner fire igniting a spiritual hunger and lighting a path.  I realized that I was witnessing the end of a three-year intensive journey that built upon a study of the life of the Founder and his spiritually-driven pedagogy.

Courageous Dialogue
Often conversation openness and honesty in conversations about religious outlook are threatened by judgment and condemnation.  Creating trusted spaces where we can speak openly about our faith seems to me to be a great grace of our formation programs.  As I think back on my summer, I think of the closing circle conversation at Saint Mary’s College at the mini-Buttimer, at the end of the day reflections at LSJI, at the dialogue in the Buttimer III class, and the dialogue in small groups at VEGA – all dialogues marked by an openness to share questions, doubts, convictions and visions.  Where would we be as a Lasallian family without these courageous conversations?  Where would we be as Church?

Community
As I lived in community at LSJI, Buttimer, and VEGA this summer, I remembered the impact of the community of my cohort of the Lasallian Leadership Institute.  All these years later, members of that LLI cohort #2 remain friends and Lasallian colleagues.  And right in front of my eyes, I witnessed that building of community formed by those willing to take the risk of walking a spiritual road together.  A supportive community encourages one to take risks to open up to challenging ideas, but taking risks with others also creates community – a wonderful, nurturing dynamic. Often, I heard participants talk about the quality of the people in their class or program.  In that atmosphere of openness and growth, participants establish connections which go far beyond the end of the formation program.

Closing Thoughts
Although I find myself dragging a bit at the end of the summer, I also am grateful and proud that we engage each other at levels that are personally and professionally vital.  Spirituality makes a difference for us.  Just this afternoon, I met with a Lasallian partner who completed her first year of Buttimer, and she’s returned with such zeal asking the question ‘How can I possibly share what I experienced this summer?  Yet I know that I need to share this back home.”

Seen through the eyes of faith, her Buttimer experience is not simply the result of a good program – it’s the result of the movement of God working through that communal experience of seeking God together as our brother De La Salle sought God’s guidance.  That’s Lasallian formation.  That’s our aim – to work hard to set up opportunities where we can get out of the way to let the Spirit go.

[1] MEL Bulletin 51, Formation for the Lasallian Mission, A Common Frame of Reference, April 2014, Brothers of the Christian Schools, Rome, Section 3.1.