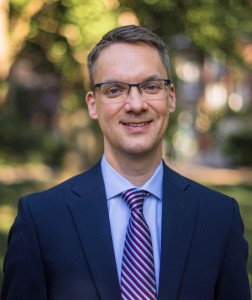 San Miguel High School in Tucson, Arizona has announced the appointment of Michael Richards as its new principal for the 2019-2020 school year.  The announcement was made by San Miguel President and CEO Dave Mason.

In his announcement, Mason stated, “We are eager to welcome back Richards to San Miguel. His commitment to student success, understanding of how to support teachers and their work, and willingness to build on traditions of success will be integral in this role.”

A graduate of Warren De La Salle Collegiate High School in Warren, Michigan, Richards currently serves with the Enhancing Catholic School Identity (ECSI) Research Group at the Catholic University of Leuven in Belgium, where he supports the learning of teachers and principals internationally through the development of research-based tools, resources, and programs for enhancing Catholic school identity and mission.  He also is study advisor to first-generation international students.

A veteran of more than twenty years as a local, national, and international educator, Richards brings to his new role experience as a classroom teacher, school administrator, curriculum resource developer and leader of programs in teacher training, principal development, and institutional learning for Catholic schools.

“I have developed a keen awareness of the factors that have the greatest influence on student learning in Catholic schools,” Richard said.  “I look forward to bringing my skill set and my passion for education back to San Miguel and to broadening my abilities to support the work of teachers and staff in partnership with families and the wider community.”