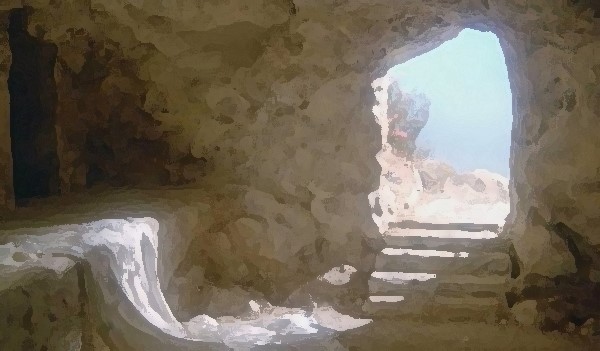 Monday of the Octave of Easter

Mary Magdalene and the other Mary went away quickly from the tomb, fearful yet overjoyed, and ran to announce the news to his disciples.  And behold, Jesus met them on their way and greeted them.

They approached, embraced his feet, and did him homage.  Then Jesus said to them, “Do not be afraid.  Go tell my brothers to go to Galilee, and there they will see me.”

While they were going, some of the guard went into the city and told the chief priests all that had happened.  The chief priests assembled with the elders and took counsel; then they gave a large sum of money to the soldiers, telling them, “You are to say, ‘His disciples came by night and stole him while we were asleep.’  And if this gets to the ears of the governor, we will satisfy him and keep you out of trouble.”  The soldiers took the money and did as they were instructed.  And this story has circulated among the Jews to the present day.

One of the first things to be done by those who have risen with Christ and who wish to lead a new life is to regulate their conversation properly, making it holy and pleasing to God.  Ordinarily, especially in communities, it is in our talk that we commit most of our faults and the most serious ones.  It follows that conversation is one of the things that we need to watch over the most so that it does not become harmful.

In your conversations and recreations, are you careful to take Jesus Christ for your model? Is it with the purpose of edifying one another that you participate in them?  On leaving them are you all on fire with divine love, as were the two disciples who were traveling to Emmaus?  Like them, are you better instructed regarding your duties? Are you more encouraged to perform these duties well?  Are their topics of conversation the same as yours? Are their maxims and ways of acting sometimes the subject of your discussions?  That is how you will benefit from the moments of recreation that obedience grants you to relax from your work and to restore your energy.

Eternal Father, on Easter morning, you raised your Son from the dead.  Thank you for the gift of hope that you have given us.  Now we know that no problem is too difficult to overcome and that even death has no final power over us.  By the power of your grace, our spirits are fully alive.  Grant that we may use our lives to be signs of your redemption to others, especially to those that you have entrusted to our care.  We ask this of you who lives and reigns with your Son and the Holy Spirit, one God, forever and ever.  Amen.