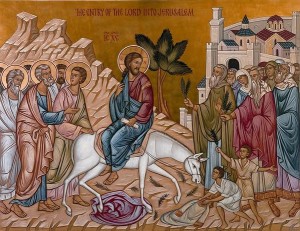 Palm Sunday of the Lord’s Passion

The elders of the people, chief priests and scribes, arose and brought Jesus before Pilate.  They brought charges against him, saying, “We found this man misleading our people; he opposes the payment of taxes to Caesar and maintains that he is the Christ, a king.”  Pilate asked him, “Are you the king of the Jews?”  He said to him in reply, “You say so.”  Pilate then addressed the chief priests and the crowds, “I find this man not guilty.”  But they were adamant and said, “He is inciting the people with his teaching throughout all Judea, from Galilee where he began even to here.”

On hearing this Pilate asked if the man was a Galilean; and upon learning that he was under Herod’s jurisdiction, he sent him to Herod who was in Jerusalem at that time.  Herod was very glad to see Jesus; he had been wanting to see him for a long time, for he had heard about him and had been hoping to see him perform some sign.  He questioned him at length, but he gave him no answer.  The chief priests and scribes, meanwhile, stood by accusing him harshly.  Herod and his soldiers treated him contemptuously and mocked him, and after clothing him in resplendent garb, he sent him back to Pilate.  Herod and Pilate became friends that very day, even though they had been enemies formerly.  Pilate then summoned the chief priests, the rulers, and the people and said to them, “You brought this man to me and accused him of inciting the people to revolt.  I have conducted my investigation in your presence and have not found this man guilty of the charges you have brought against him, nor did Herod, for he sent him back to us.  So no capital crime has been committed by him. Therefore, I shall have him flogged and then release him.”

But all together they shouted out, “Away with this man!  Release Barabbas to us.”  (Now Barabbas had been imprisoned for a rebellion that had taken place in the city and for murder.)  Again Pilate addressed them, still wishing to release Jesus, but they continued their shouting, “Crucify him! Crucify him!”  Pilate addressed them a third time, “What evil has this man done?  I found him guilty of no capital crime.  Therefore, I shall have him flogged and then release him.”  With loud shouts, however, they persisted in calling for his crucifixion, and their voices prevailed.  The verdict of Pilate was that their demand should be granted.  So he released the man who had been imprisoned for rebellion and murder, for whom they asked, and he handed Jesus over to them to deal with as they wished.

As they led him away they took hold of a certain Simon, a Cyrenian, who was coming in from the country; and after laying the cross on him, they made him carry it behind Jesus.  A large crowd of people followed Jesus, including many women who mourned and lamented him.  Jesus turned to them and said, “Daughters of Jerusalem, do not weep for me; weep instead for yourselves and for your children for indeed, the days are coming when people will say, ‘Blessed are the barren, the wombs that never bore and the breasts that never nursed.’  At that time people will say to the mountains, ‘Fall upon us!’ and to the hills, ‘Cover us!’ for if these things are done when the wood is green what will happen when it is dry?”  Now two others, both criminals, were led away with him to be executed.

When they came to the place called the Skull, they crucified him and the criminals there, one on his right, the other on his left.  Then Jesus said, “Father, forgive them, they know not what they do.”  They divided his garments by casting lots.  The people stood by and watched; the rulers, meanwhile, sneered at him and said, “He saved others, let him save himself if he is the chosen one, the Christ of God.”  Even the soldiers jeered at him.  As they approached to offer him wine they called out, “If you are King of the Jews, save yourself.”  Above him there was an inscription that read, “This is the King of the Jews.”

Now one of the criminals hanging there reviled Jesus, saying, “Are you not the Christ?  Save yourself and us.”  The other, however, rebuking him, said in reply, “Have you no fear of God, for you are subject to the same condemnation?  And indeed, we have been condemned justly, for the sentence we received corresponds to our crimes, but this man has done nothing criminal.”  Then he said, “Jesus, remember me when you come into your kingdom.”  He replied to him, “Amen, I say to you, today you will be with me in Paradise.”

It was now about noon and darkness came over the whole land until three in the afternoon because of an eclipse of the sun.  Then the veil of the temple was torn down the middle.  Jesus cried out in a loud voice, “Father, into your hands I commend my spirit”; and when he had said this he breathed his last.

The centurion who witnessed what had happened glorified God and said, “This man was innocent beyond doubt.”  When all the people who had gathered for this spectacle saw what had happened, they returned home beating their breasts; but all his acquaintances stood at a distance, including the women who had followed him from Galilee and saw these events.

The first Prime Minister of Israel, David Ben-Gurion, once said, “In order to be a realist you must believe in miracles.”  What this seems to suggest is that what exists beyond our everyday reality is, in fact, what defines our ultimate reality.  We are made for transcendence, for living in a way through which we can make the connections between the known and the unknown, the possible and the impossible, the now and the not yet.  This is a something to ponder as we prepare for Holy Week and to walk again through the harrowing, yet majestic, story of the passion and death of our Lord.

While human events may seem accidental or random, the convergence of God’s time, people, and grace for God’s purposes is not.  This is the message of the Paschal Mystery.  There are no meaningless experiences.  If our mission soars, it is because it is necessary.  If it stumbles, it is because it is necessary.  What is good and right ultimately can come out of whatever we do if we see and embrace the whole.  To be a person of faith is to have eyes that can focus on both here and beyond in a way that brings them together, not as an idealized vision but as promised fulfillment.  We are called to be “sacred realists”, to see all moments, even the most mundane or profane, as doors to ultimate truth.

During this Holy Week, we are invited to enter into the greatest chapter of the saga of God’s saving love for us.  It is a story in which we should not seek only the gentle moments; we also must seek the brutal ones.  We are living a journey in which only by embracing all of life’s experiences can we gain an understanding of ourselves and the redemption to which we are being called.

Eternal Father, your Son came to us to help us overcome the brokenness of our world and restore us to wholeness. During this Holy Week, open us to see and embrace the fullness of life, so that we will know in all of our experiences the grace of your presence and the purposes of your will.  We ask this of you who lives and reigns with your Son and the Holy Spirit, one God forever and ever.  Amen.