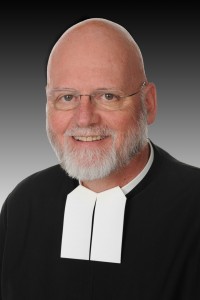 Brother Robert Schieler, FSC, Superior General, has announced that he has appointed Brother George Van Grieken, FSC of the District of San Francisco New Orleans (SFNO) as Secretary Coordinator of Lasallian Research and Resources for the Institute, effective September, 2019.

Brother George will succeed current Secretary Coordinator Brother Diego Muñoz, FSC, who has served in the position since 2008.

“I was surprised, humbled, and intrigued,” Brother George said about his appointment.   “This was not something that was anywhere on my radar.  It’s wonderful to be able to develop further Lasallian research and resources opportunities within this larger Institute-wide responsibility.”

Presently, Brother George serves as Director of the SFNO Lasallian Resource Center, which Brother George and the District Office of Education launched in 2016.  He will continue in that role while also assuming the Secretary Coordinator position.

“(I take this as) a compliment to the SFNO District,” Brother George continued, “and a positive recognition of the Lasallian Resource Center’s creation and development.  My involvement in that has been a labor of love. It’s humbling to now do similar work within a much larger venue.”

SFNO Visitor Brother Donald Johanson, FSC, offered his congratulations, saying, “We are excited for Brother George and this opportunity for him to share his gifts with the larger Institute, while still being able to continue the important District work that he has established with our Lasallian Resource Center.”

Traditionally, the Secretary Coordinator is tasked with furthering the quality and scope of Lasallian research and studies in the Institute, both independently and in collaboration with other Lasallian researchers.  According to Brother George, the importance of this work cannot be overstated.

“The Lasallian world looks so much different today than it did even fifty years ago,” he observed. “We are not so much a smaller or larger Institute today, than we are a different kind of Institute, one that is characterized by a number of things, including a shared mission that is largely carried out by Partners, a plethora of multi-cultural and multi-religious contexts, the predominance of highly developed technology and communications media, the de-facto transformation of what education means today along with how and why it is needed, and an intentional leaning towards the “especially to the poor” part of our mission.”

Brother George continued, “In order to help make sense of all of these dynamics, it is essential that at least two things receive attention. First, that the foundational and historical resources that have recorded, described, and informed our charism from the first days of the Institute to the last gathering in Rome are made easily accessible and comprehensible. Second, that those who either by profession or by personal interest wish to study and apply such resources in a deliberate, academically rigorous fashion are invited, supported, and equipped to do so.”

A focus for Brother George when he begins in September will be to continue with the priorities and projects that are in place or in development as per the directives of the Superior General and his General Council.  Within that focus, he sees several areas that he considers to be of great importance.

“One area,” he explained, “deals with listening, communication, and collaboration. In order to be sensitive to the realities of the Lasallian world, and in order to support and develop resources that address real needs for real people in real circumstances, it is critical to have conversations around the topic of research and resources. What I would like to explore is the creation of a regular roundtable on the topic, and to utilize modern communication to do so easily and inexpensively.  Another area focuses on access to present resources, not only at the Generalate but also throughout the Lasallian world, primarily those Lasallian resources located at the member institutions of the International Association of Lasallian Universities (IALU).  The third area – and this is nothing more than an idea at this time – is the practical support that researchers often need in order to complete their studies.”

With a dual-position job that will hold so many expectations as well as possibilities, Brother George knows from experience that he is in for a challenge.  However, he expresses both a practical and playful perspective on this, saying simply, “I’m looking forward to the opportunity with cautious optimism.  And I remain surprised, humbled, and intrigued.”