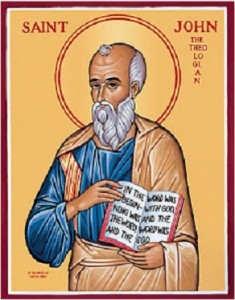 Intention:  That, in this Octave of Christmas, we will continue to find ways to bring the presence of Christ and his Good News to all of the world.

Eternal Father, on this day that we remember the evangelist Saint John, may we especially recall from his Gospel the words, “For God so loved the world that he gave his only Son, so that everyone who believes in him might not perish but might have eternal life.”  In this Octave of Christmas, inspire us to celebrate in your Son’s birth the gift of our redemption, and proclaim it through our own spirit of giving and of peace.  We ask this of you who lives and reigns with your Son and the Holy Spirit, one God forever and ever.  Amen.