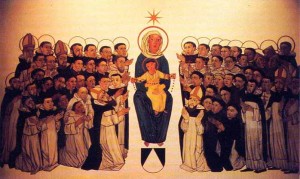 Intention: For those entrusted with the care of the children and young people of our world, that they will be channels of God’s wisdom, compassion, fidelity, and love.

Some Sadducees, those who deny that there is a resurrection, came forward and put this question to Jesus, saying, “Teacher, Moses wrote for us, if someone’s brother dies leaving a wife but no child, his brother must take the wife and raise up descendants for his brother.  Now there were seven brothers; the first married a woman but died childless.  Then the second and the third married her, and likewise all the seven died childless. Finally, the woman also died.  Now at the resurrection whose wife will that woman be?  For all seven had been married to her.”  Jesus said to them, “The children of this age marry and remarry; but those who are deemed worthy to attain to the coming age and to the resurrection of the dead neither marry nor are given in marriage. They can no longer die, for they are like angels; and they are the children of God because they are the ones who will rise.  That the dead will rise even Moses made known in the passage about the bush, when he called ‘Lord’ the God of Abraham, the God of Isaac, and the God of Jacob; and he is not God of the dead, but of the living, for to him all are alive.”  Some of the scribes said in reply, “Teacher, you have answered well.”  And they no longer dared to ask him anything.

Let it be clear, then, in all your conduct toward the children who are entrusted to you, that you regard yourselves as the ministers of God, carrying out your ministry with love and a sincere and true zeal, accepting with much patience the difficulties you have to suffer, willing to be despised by men and to be persecuted, even to give your life for Jesus in the fulfillment of your ministry.

The zeal that ought to inspire you is meant to give you these dispositions, so that you recognize that it is God who has called you, who has destined you for this work, and who has sent you to labor in his vineyard. Do this, then, with all the affection of your heart, working entirely for him.

Eternal Father, your Son taught that we should live our daily lives mindful of our eternal lives in you.  It is in our identities as your children that we find the meaning and purpose of our lives.  Help us to always remember the sacred importance of the choices that we make and the things that we do, especially in our relationships with one another.  We ask this of you who lives and reigns with your Son and the Holy Spirit, one God, forever and ever.  Amen.