The District of San Francisco New Orleans has announced that Patrick Bonacci, AFSC, of La Salle High School, Pasadena, California, is its recipient of the Distinguished Lasallian Educator Award for 2018.  The announcement was made by District Office of Education Director Michael Daniels, Ed.D. 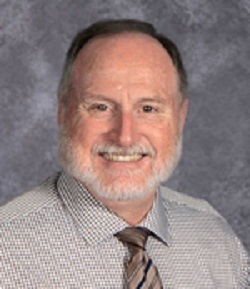 The annual Distinguished Lasallian Educator Award is sponsored by Christian Brothers Conference and is presented in the name of all Lasallians of the Lasallian Region of North America (RELAN) to honorees from each of the RELAN Districts.  It recognizes educators who exemplify the ideals of Saint John Baptist de La Salle, Patron of Christian Teachers of Youth.

“I am honored,” Bonacci says, “to receive this award and humbled to be in the company of so many distinguished Lasallian Educators. As I enter my 47th year of being a Catholic School Educator, I know without a doubt that God is directing my journey. I am so grateful that the journey brought me to Lasallian education – first as a student at Saint Mary’s College of California and for the last 33 years as an educator at the sacred community that exists at La Salle, Pasadena.”

Bonacci is in 33rd year at La Salle High School, where he currently is Vice-President for Mission.  At La Salle, he has served in numerous other capacities, including dean of students, admission director, dean of studies, assistant principal, and principal.  Bonacci introduced the school’s service learning program, expanded its service immersion program, and established its Founder’s Week of Service activity.  In 2006, he was made an affiliated member of the Institute of the Brothers of the Christian Schools.

In his letter nominating Bonacci for the Award, La Salle president Richard Gray wrote of Bonacci’s “involvement in the local community, his commitment to faith and justice education, and his deep involvement in service to others which demonstrates his limitless potential for transforming Lasallian communities…Pat has constantly focused his attention to the students entrusted to his care, their parents, and teachers.”

Brother Donald Johanson, Visitor of the San Francisco New Orleans District, offered his congratulations, saying, “We are blessed to have Pat as a member of our Lasallian family, and we are pleased to be able to publicly honor and thank him for his many contributions and years of dedicated service.”

Bonacci, together with the recipients from the Midwest District and the District of Eastern North America, will be presented with the Award at the closing banquet of the Huether Lasallian Conference, which will take place November 15-17, 2018 in Minneapolis, Minnesota.