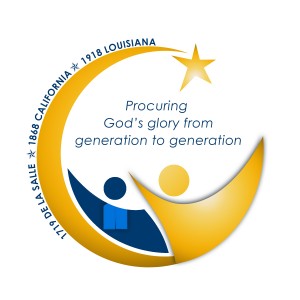 Undaunted by the Gulf Coast’s customary late-July heat, Brothers from across the District were joined by a large contingent of area Partners, benefactors, and friends for morning Mass at Saint Louis Cathedral, a reception and presentation at the Old Ursuline Convent Museum, and a reception and river cruise on the famous Steamboat Natchez.

Under the theme, “Procuring God’s Glory from Generation to Generation,” the celebration was organized to recognize the achievements of the Brothers in Louisiana and to celebrate with the Louisiana Lasallian family the life of the Brothers and their mission with their Partners in the world today.  Event planning and direction were led by planning committee chair Brother James Joost, FSC, Auxiliary Visitor, and local coordinator Brother Gale Condit, FSC, Lasallian Christian Brothers Foundation (LCBF) Development Director.  Other committee members included Karen Hebert, Barbara Turner, Bob Carrejo, and Don Stout.

Activities actually began for the Brothers the evening before with a fraternal gathering and dinner at Muriel’s, a popular French Quarter Restaurant.  There, the Brothers and their guests were welcomed by Brother Visitor Donald Johanson, Brothers James, and Brother Gale.  Its warm and festive tone communicated to all that the weekend was to be a New Orleans-style celebration! 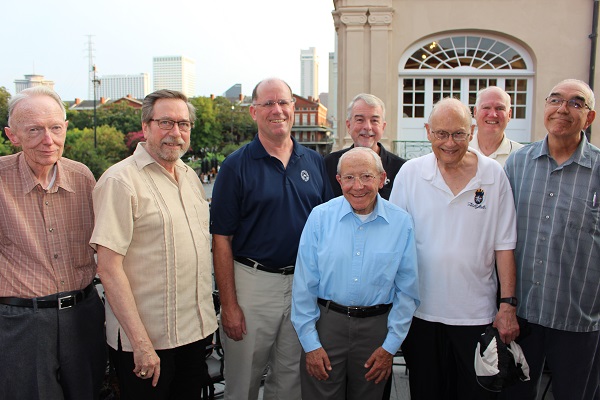 Archbishop Thomas J. Rodi, a 1967 graduate of De La Salle High School in New Orleans, delivered the homily.  Reflecting on the Brothers’ history and legacy, both in Louisiana and around the world, Archbishop Rodi said, “Institutions may come and go, the number of members in an order may fluctuate between times of growth and decline, but the faith which (Saint La Salle) wished to share with young men remains. That is the legacy of (Saint La Salle). That is the charism of the Christian Brothers: to teach young people for the purpose of their betterment in life and for the salvation of their souls. In short, to give both knowledge and wisdom to young people.”  (Read Archbishop Rodi’s homily.)

“It was special,” Brother Gale later said, “seeing archbishops, priests and deacons crowding the altar for Mass, thanking God for the hundred years the Brothers have provided a human and Christian education throughout many parts of Louisiana.  It was so nice seeing students from the four local Lasallian schools not only present but actively involved, and how the choir added to the spirit of the occasion.” 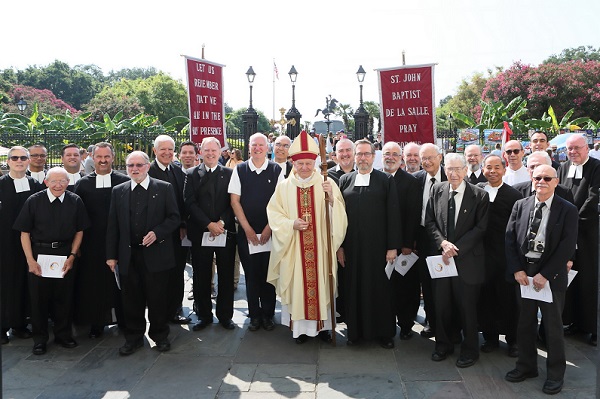 The Brothers with Archbishop Aymond after Mass.

After Mass, many of the attendees made the short walk up Chartres Street to the Old Ursuline Convent Museum for a reception hosted by local restaurant, Drago’s.  The Museum’s major exhibit, “The Church in the Crescent: Three Hundred Years of Catholicism in New Orleans,” includes a special section on the Brothers’ history in Louisiana.  Dr. Emilie Leumas, Director of Archdiocesan Archives and Records, presented the story of the Ursuline convent, followed by a presentation from Brother James on the Brothers’ 100 years of ministry.  A slide show featured highlights of the lives of notable Brothers, both living and deceased, who served in various apostolates throughout Louisiana.

Commenting on the exhibit, Brother James said, “Though the people have changed over the years, the Lasallian heritage continues to move and grow.  I hope people would recognize that we now build on the shoulders of giants and the stories show us that “giants” are ordinary Brothers, teachers, staff, students, parents, alumni who do extraordinary things in lives of students.  With faith in God and each other, we can do the same today.”

A second reception took place that day on the Steamboat Natchez.  Attendees were treated to refreshments, dinner, and music as part of a two-hour “jazz cruise” down the Mississippi River.  Brothers and Partners were able to share the camaraderie and memoires of years of Lasallian adventures together.  For many, it was their first authentic riverboat experience, and harkened back to a time a century before when the Brothers made their way to Louisiana and another chance to find success in their determination to establish their works there once and for all. 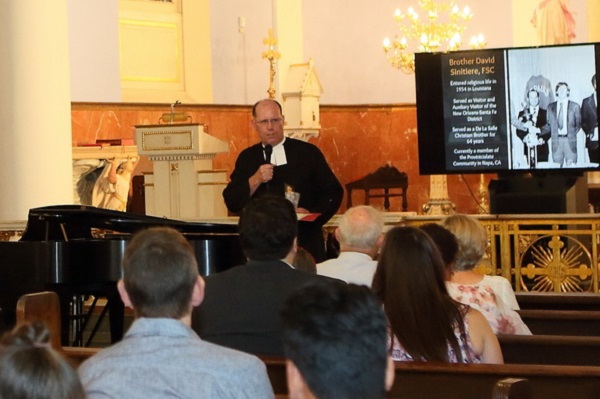 The Christian Brothers had first been sent to the Diocese of New Orleans in 1819, but administrative confusion resulted in the venture being short-lived.  The Brothers returned to Louisiana from 1851-1900, operating schools until epidemics and financial hardships forced them to withdraw a second time.  Then, in 1918, a number of Brothers who four years earlier had fled the Mexican Revolution were assigned to Covington, Louisiana to assume operation of Saint Paul’s School from the Benedictines of Saint Joseph’s Abbey.  That same year, in New Iberia, Louisiana, another group of Brothers established Saint Peter’s College (high school), now Catholic High.  Both the De La Salle Christian Brothers and schools conducted by them have been present in Louisiana ever since.

Following the New Orleans celebration, Brothers James, Gale, and Donald reflected on the gathering.  All agreed that District oneness was the theme of the day.

“I was inspired by how happy people were to attend such a meaningful event,” Brother Gale shared.  “All the day’s activities seemed to go well.   The two receptions provided everyone with opportunities to share their positive feelings and experiences about Lasallian education.  There was a definite family spirit.”

Brother James added, “The spirit of community and generosity among the alumni and alumni parents in attendance evidenced the spirit of faith and zeal of the Brothers and our Lasallian Partners who formed the school communities at their respective times.” 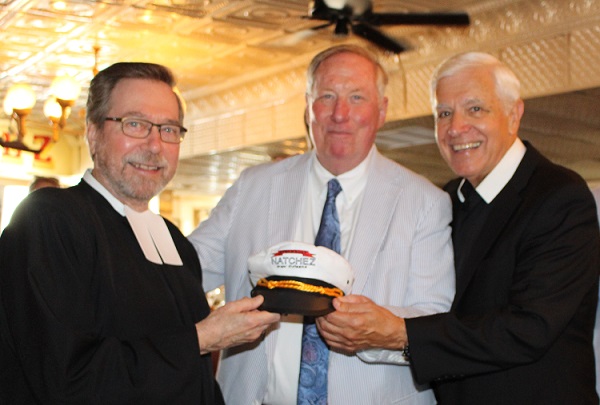 Finally, Brother Donald seemed to capture both the impact and the importance of the day, saying, “There was a great sense of unity surrounding the celebration. Brothers from all over the District attended and were able to celebrate both with our Lasallian partners and other Brothers. I hope we can continue to have events that gather together various members of the District in celebration of our long-standing dedication to education.”

The New Orleans celebration was one of three anniversary events scheduled for 2018-2019 by both the SFNO District and the Institute.  In March, 2019, the District will mark the 150th anniversary of the Brothers’ arrival in San Francisco, California.  Also in 2019, the Institute will commemorate the 300th year since the entry into eternal life of Saint John Baptist de La Salle, Founder of the Brothers of the Christian Schools and Patron Saint of Teachers of Youth.