The District of San Francisco New Orleans’ Lasallians Without Borders Committee (LWOB) has chosen the 2015 work, In Our Backyard: Human Trafficking in America and What We Can Do to Stop It, by Nita Belles as its 2018-19 “One Book, One District” selection. 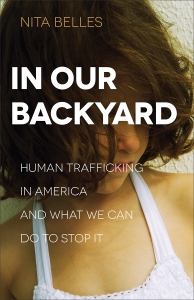 In this unsettling and educational book, domestic violence and human trafficking expert Belles addresses the reality that human trafficking is not a phenomenon limited either to developing countries or to runaways or otherwise vulnerable youth.  Drawing from her extensive experience, she educates readers about the forms and risk factors of human trafficking in the United States, as well as how to become involved in its prevention.

In announcing the Committee’s choice, LWOB project manager Alma Mejia-Garcia stated, “Pope Francis spoke of the call and responsibility that all Christians have in discovering and creating paths of dignity for all people.  This book selection is a call to concrete action and a realization of the fact that human trafficking is not only an international issue that happens to ‘other people.’  Nita Belles presents readers with real stories of victims of modern day slavery here in the United States.  The religious focus used by the author serves as a guiding principle to understanding our responsibility to our trafficked brothers and sisters.”

Launched in 2016, LWOB’s “One Book, One District” initiative invites SFNO schools to participate each year in the guided reading of a specially-selected book that focuses on current issues concerning social inequity and human dignity.  LWOB specially designs curriculum resources for use with both students and adults for critical reflection on the presented issue, as well as possible action steps that can be taken as a response.