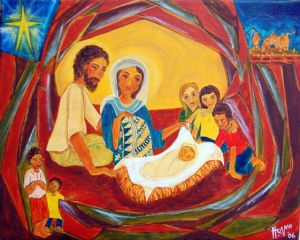 Feast of the Holy Innocents, Martyrs

Intention:  That, in this Octave of Christmas, we will continue to find ways to be the Body of Christ and his Good News to all of the world.

When the magi had departed, behold, the angel of the Lord appeared to Joseph in a dream and said, “Rise, take the child and his mother, flee to Egypt, and stay there until I tell you.  Herod is going to search for the child to destroy him.”  Joseph rose and took the child and his mother by night and departed for Egypt.  He stayed there until the death of Herod, that what the Lord had said through the prophet might be fulfilled, Out of Egypt I called my son.

When Herod realized that he had been deceived by the magi, he became furious.  He ordered the massacre of all the boys in Bethlehem and its vicinity two years old and under, in accordance with the time he had ascertained from the magi.  Then was fulfilled what had been said through Jeremiah the prophet:

A voice was heard in Ramah, sobbing and loud lamentation;
Rachel weeping for her children, and she would not be consoled,
since they were no more.

These little children died not only as martyrs but also by taking the place of Jesus Christ. Herod wanted to kill him and looked for him everywhere. Not finding him, he resolved to kill a great number of children, assuring himself that Jesus Christ would be included in their number. He wanted no exception made among those who had been born from before the time the Magi had come to Jerusalem up to that moment. What fortunate children, to have lost their life in order to preserve the life of Jesus Christ!

We can have the same opportunity as they by giving our life to prevent Jesus Christ from dying in us. Sinners, says Saint Paul, crucify Jesus Christ anew. If, then, we do not want him to lose his life, we must do violence to ourselves so as not to fall into sin and not to commit the slightest fault. To procure this benefit, we need great vigilance over ourselves.

Eternal Father, on this the Feast of the Holy Innocents, we pray for the world’s children.  They are our most sacred responsibility.  Through the power of your Spirit, may we give our unconditional care and vigilance to them, especially the many who know the pain of poverty, neglect, abuse, or despair.  In this Octave of Christmas, may we become even more awake to their needs, being for them attentive and devoted instruments of your love.  We ask this of you who lives with your Son and the Holy Spirit, one God forever and ever.  Amen.