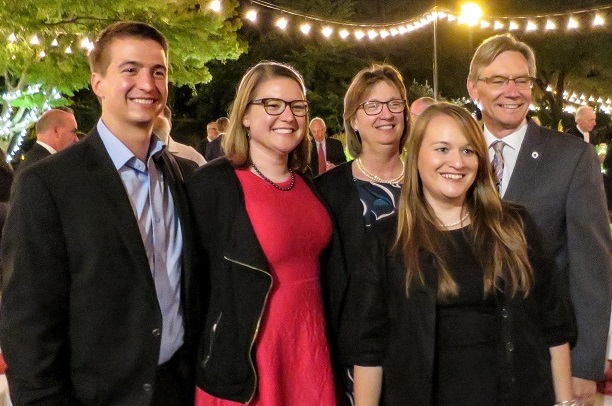 Longtime Lasallian Partner and former District of San Francisco New Orleans Office of Education director Gery Short was presented with Letters of Affiliation by the Institute of the Brothers of the Christian Schools on September 16, 2017 at Mont La Salle, Napa, California.  The presentation was made on behalf of the Institute by District Visitor Brother Donald Johanson, FSC.

Affiliation is a formal recognition and acknowledgement extended by the Institute to those persons who have supported the Brothers in their work, not only through outstanding gifts and services, but also through their professional, personal and fraternal relationship with them.  In presenting to them Letters of Affiliation, the Brothers welcome and celebrate affiliates as honorary members of the Institute.

A large contingent of Brothers and Lasallian Partners – Brother Donald described it as “a collection of Lasallian all-stars” – gathered in the Mont La Salle Chapel for the ceremonies honoring Short, whose almost 40-year association with the Lasallian mission career included serving as a teacher at Saint Mary’s College High School, as Director of Formation for Mission and then Office of Education Director, first for the San Francisco District and then the San Francisco New Orleans District, and as chair of the Regional Education Board, the Lasallian Education Council, and the 2006 International Mission Assembly.  He also was a lay consultant – among the first ever – for both the 1993 and 2000 General Chapters in Rome. 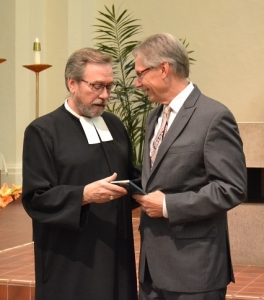 The ceremony began with Mass, with Bishop Emeritus of Oakland John S. Cummins, AFSC presiding.  The principal celebrant was Father Jayson Landeza, a graduate of Saint Mary’s College High School in Berkeley, California and one of Short’s former students.

Brother Richard Moratto, FSC began the presentation of the Letters of Affiliation with a benediction from the Mont La Salle Provincialate Community, whose members nominated Short for affiliation, stating, “We Brothers of the Christian Schools embrace you as a dedicated educator in Lasallian ministry, enhancing the Christian life among our students and colleagues, exemplifying servant leadership in an outstanding way, and conveying among us all a sense of the presence of God and of God’s providential cares for each one of us.”

In presenting the Letters of Affiliation to Short, Brother Donald first quoted from the Institute’s handbook on affiliation: “The candidate (for affiliation) is someone whose spirit, so closely resembles the authentic F.S.C. spirit, that the Brothers would want to declare this person as one of us – as an affiliated member of the congregation.”  He then continued, “Gery, you have been closely associated with the Brothers over the years, both in your interaction with us and in your own spirituality which is markedly Lasallian. You have manifested a fraternal relationship with us, the distinguishing characteristic of an affiliate.”

As the presentation and Mass ended, Bishop Emeritus Cummins echoed Brother Donald’s sentiment, saying, “One of your colleagues called you ‘a man of his own time’… Yours is a profound grasp of educational communities of faith, one that is the identity of the Christian Brothers’ schools.” 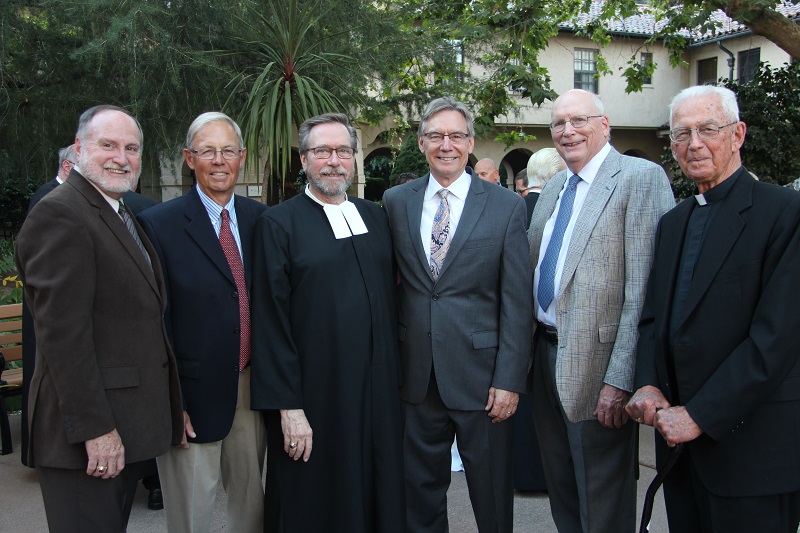 At the banquet that followed, several of Short’s colleagues from De La Salle Institute addressed the guests, looking back on their years spent together as they paid tribute to their friend and fellow Lasallian.

Former Office of Education office manager Jackie Berlogar recalled her experience of Short’s leadership, explaining, “Gery made it the team’s responsibility to serve – it didn’t matter what the request was or who made it – it was our job to respond as quickly as possible.  We were there to make sure that our students and their families, our administrators, faculty, staff, and board members understood and supported the Brothers’ mission.”

For District Formation for Mission director Greg Kopra, it was Short’s gift for professional and personal mentoring that made a lasting impression.  “Gery encouraged me in my own growth as a Lasallian educator,” he shared.  His constant encouragement and invitation inspired me, and stretched me – to learn more, to take on more responsibility, to really ‘own’ my vocation.  And I watched him do the same for countless others in the District, Region, and Institute.” 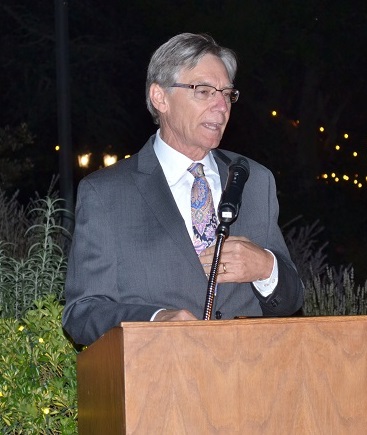 Gery Short offers his thoughts to his colleagues and friends. (Photo SFNO Communications)

Lasallian Resource Center director Brother George Van Grieken, FSC spoke of Short’s significant impact on the wider Lasallian mission, observing, “The Lasallian mission is thriving today in more places around the world than it ever has in the past. And we have expanded our works all over this District, especially when it comes to serving the marginalized, because you took that conviction to heart from the very beginning and helped us understand how it is lived out today.”

Appropriately, the evening ended with Short sharing his own thoughts on the special recognition that he had received from the Institute and on the path that had led to it.

Perhaps most movingly, Short spoke of fraternity.  “I have,” he said, “felt close to many of the Brothers as brothers, especially from across the district for many years.  I feel comfortable calling many of you by your first names and have genuine friendships with many of you.” 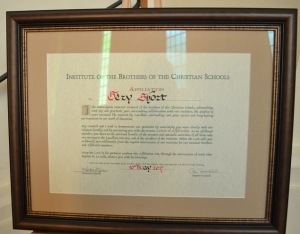 Short concluded his remarks, and the occasion, by saying, “Brothers, I am very grateful and honored to be joining your ranks as an affiliated member.   I promise to continue, as I have been committed to do for some time, to represent your goodness, your character, and charism.  Please know that I feel most fortunate, and it has been one of the greatest gifts in my life to have found a home with you.”

Read the commemorative brochure of the affiliation produced by the Brothers.