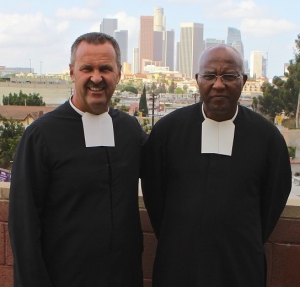 Brother Ghebreyesus’ travels in SFNO took him first to San Francisco, CA, May 10-11, and Sacred Heart Cathedral Preparatory and De Marillac Academy; then to Los Angeles, May 12-15, and La Salle High School and Cathedral High School.

As Visitor of the Lwanga District, Brother works closely with Christian Brothers Conference on the Region’s twinning program, which pairs ministries in the Lwanga District with schools in SFNO, the Midwest District (MW), and the District of Eastern North America (DENA). Twinning helps students in these ministries build relationships, while students in our Region raise donations for fellow Lasallians in Lwanga. 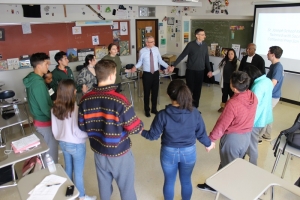 On the first day of his visit, Brother Ghebreyesus was joined by Brother James Joost, Auxiliary Visitor, and Michael Daniels, Office of Education-Mont La Salle Director.  That morning, at Sacred Heart Cathedral Preparatory (SHC), Brother toured the school, visited classes, and spoke with students about Lwanga and the twinning program.  He also stayed with the Brothers’ Community there.  Reflecting on Brother’s visit, school twinning coordinator Greg Schmitz observed, “He made us feel that we were part of his family; our Lasallian family. He told students that when they walk to and from school each day, they are walking with the students from St. Joseph’s (SHC’s twinned school in Keren, Eritrea). Also, we found out he is a big fan of basketball!” 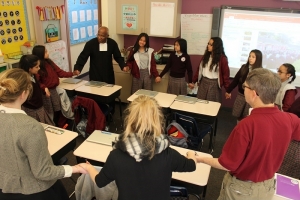 In the afternoon, Brother Ghebreyesus visited De Marillac Academy for a tour, an impromptu P.E. lesson complete with basketball games and foot races with the students, and a class presentation in which Brother returned to his Lasallian family theme.  Fifth grade Lead Teacher Meaghan Osborne said, “I was moved by his own story and the way he engaged our students in telling the stories of the students in the Lwanga District.  He asked us to remember ‘walking with’ children throughout the world.   We held hands in a circle as he invited us to walk in solidarity with Lasallian educators and students throughout the world.  This left a lasting impression on me.” 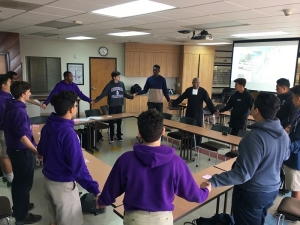 The next day, Brother Ghebreyesus traveled to Los Angeles and an afternoon visit to La Salle High School in Pasadena, where he spoke with students about their twinned school, Mount La Salle College in Naka, Nigeria, and about the two schools’ Skype with each other this past February.  He also shared powerful personal experiences from his own life.  Vice President for Mission Patrick Bonacci, AFSC, shared: “Brother spoke about an event that occurred in his youth, when the majority of those living in his home town were rounded up and murdered by rebels. He and some in his family escaped them by hiding.  It was soon after this that his father brought him to the local Brothers’ school, which he entered, moving from there through his Novitiate years to the taking of his vows.  Our students were spellbound by the story.”

After spending the weekend with his sister, Brother Ghebreyesus concluded his SFNO trip with a Founder’s Day visit to Cathedral High School.  There, students and Principal and school twinning coordinator Brother John Montgomery showed him  around the campus and spoke with him about twinning.  Later, Brother Roch Dufresne’s Video Production class interviewed Brother Ghebreyesus for their KCHS-LA school television station.  “Although we conduct schools on two different continents,” Brother John mused, “in speaking with Brother Ghebreyesus I was struck by how similar our challenges are in our desire to fund the Lasallian Catholic education of students.  His love for students and desire to see Brothers and partners not only teach, but coach, moderate and interact with students outside of class was most evident.” 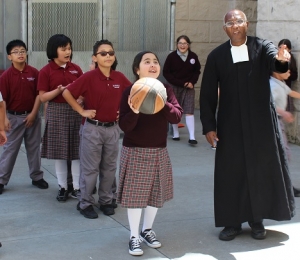 This was Brother Ghebreyesus’ second visit to SFNO, the first taking place in October, 2014, when he visited the Region and also SFNO’s schools in the New Orleans, LA area.  According to the Region’s twinning coordinator, Elizabeth Jodice, welcoming Brother Ghebreyesus back to RELAN offered an opportunity for students to make a personal connection with twinning: “Over the past few years, with Brother Ghebreyesus’ support, we’ve watched relationships blossom between students in RELAN and Lwanga as they connect over Skype, write letters, and come up with new ways to create and strengthen their bonds.  The time Brother Ghebreyesus spent with students getting to know them, sharing information about Lwanga, laughing, and playing basketball helps to continue that growth. We’re grateful to Brother Ghebreyesus and the RELAN schools for making time for these visits!”

Visit SFNO’s twinning page to learn more about twinning in the District.