Every year on May 15, the worldwide Lasallian family observes Founder’s Day, marking the occasion in 1950 when Pope Pius XII proclaimed Saint John Baptist de La Salle Patron of All Teachers of Youth.

On this day, Lasallian schools throughout the District of San Francisco New Orleans celebrate Founder’s Day with a variety of special events and activities, including Mass and prayer services, special displays and presentations, field days, school history commemorations, and special dinners and ceremonies.  For a number of schools, Founder’s Day is extended over several days or weeks.

This year, several schools shared their Founder’s Day traditions with the District Office of Communications: 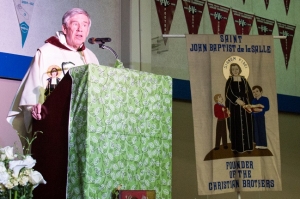 Our celebration of the founder, St. John Baptist de La Salle, lasts for several weeks each year at Christian Brothers High School. The festivities begin with the annual Founder’s Day liturgy, where the school community is reminded of De La Salle’s own vocation, as well as the call to us to continue the mission he began to serve the poor and to live out our five core principles.

The grand finale for the school year is Founder’s Day, an annual half-day celebration on the last Friday of the school year. This fantastically fun day happens all over the school campus. Activities include students receiving and signing their yearbooks, an obstacle course, jousting, sumo wrestling, dodge ball, basketball, and a tank filled with water for students to dunk their favorite teachers. There is often a live band playing and delicious snacks for students to enjoy. 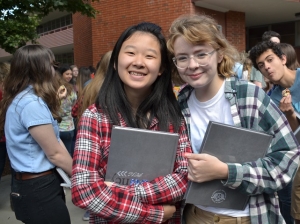 This day serves as a wonderful break in the middle of final exams and a reminder of how special and inclusive our Christian Brothers community is. For seniors, it is one final day to soak it all in before they graduate just a few days later.

After students leave, faculty and staff enjoy a luncheon and fellowship together to celebrate the end of another wonderful school year at Christian Brothers. 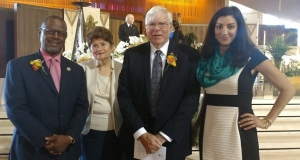 Every other year at our Founders Day Mass at the Cathedral of Saint Mary of the Assumption, we honor alumni with the Lasallian Vincentian Award.  It is given to graduates of St. Vincent, Sacred Heart, Cathedral or Sacred Heart Cathedral who embody the charisms of our founders, Saint John Baptist de La Salle and Saint Vincent de Paul. Honorees demonstrate extraordinary dedication and loyalty to the Church and to the Lasallian Vincentian community. They are committed to living a life of faith, service and community, and serve their communities with compassion, mildness, cordiality, respect and devotion.  The 2017 recipients are:

Joseph Kennedy, ’65
Upon graduating from Sacred Heart in 1965, Joe began what would become a lifelong career in service of others. He joined the California Army National Guard in 1966, and after nearly three decades, he retired from the Army Reserve in 1993. Joe began his service in the San Francisco Police Department in 1969, fulfilling roles at Ingleside, Central and Mission stations. Throughout his time with the SFPD, Joe served as a field training officer, Police Academy instructor, hostage negotiator, full inspector, and sergeant in the Auto Theft Detail and Arson Task Force. He retired in 2001. Along the way, Joe received his BA and teaching credential from San Francisco State University, married his high school sweetheart, Clothilde Dulfer, raised three children: Christine, Joe ’92, and Patrick ’94, and welcomed five granddaughters into his loving family. Joe has remained a dedicated supporter of SHC, starting the Class of 1965 Endowed Scholarship Fund which provides aid to students in need each year.

Rosemarie Lawlor Horan, ’65
For more than 15 years, Rosie served SHC, officially as the director of special events, but her countless contributions to the community reach far beyond her formal title. Throughout her time at SHC, Rosie was known for her generosity, care, attention to detail, and her ability to bring an extraordinary touch to every event. Whether she was organizing the Gold Diploma Ceremony, contributing to the Annual Spring Gala, or putting together a small birthday celebration for a fellow staff member, getting the Rosie treatment always made the event spectacular. She has served as a dedicated volunteer at both Saint Gabriel’s and Saint Cecilia’s, especially during the years her children were students. Her contributions to the Lasallian Vincentian community extend to the growth of SHC’s sister grammar school, De Marillac Academy. Rosie retired in 2015, but continues to volunteer her time at SHC in the areas of advancement and service learning. Rosie and her husband, Jim, have three children, Kevin ’99, James ’96 and Elizabeth, a Saint Ignatius alumna.

Honorable Troy Nunley, ’82
Judge Nunley was appointed to the US District Court judge on a unanimous voice vote nine months after President Obama nominated him to a seat that had been declared a judicial emergency because of vacancies and long case backlogs.  Judge Nunley was born in Hunters Point to a single mother who insisted that her children get an education. He put himself through Saint Mary’s College and UC Hastings College of the Law, then worked as a prosecutor in Alameda and Sacramento counties and as a private lawyer and a deputy state attorney general. Gov. Gray Davis appointed him to the Sacramento County Superior Court in 2002. Judge Nunley continues his work with the Church and he currently serves on the board of trustees for Jesuit High School where his son attends. He also speaks on a number of relevant topics including juvenile justice, following a vocation to help the less fortunate, mentoring, and overcoming adversity.

Alexandra Christ, ’92
Less than one year ago, Alexandra read about the Syrian refugee crisis and wondered if there was some way she could help. As a woman of both Greek and Lebanese descent, she learned that if her grandfather had not come to the US from Lebanon, she could have been a Syrian refugee herself. The idea of so many individuals and families displaced kept Alexandra up at night. She shared with the San Francisco Chronicle last December, “It was haunting me until I took action. So I got out of bed and started working.” Alexandra started Peace Joy Soccer, an organization that brings soccer balls to children in Syrian refugee camps. Last September, Alexandra donated soccer balls to eight refugee camps, three orphanages and 54 schools throughout Greece. Today she is expanding her organization’s work to include book donations. “If you have an idea in your heart, imagine what would happen if you followed through.”

Each year, Founder’s Day at Saint Mary’s High, Berkeley, is preceded by several days of education and reflection during “Founder’s Week.”  Special classroom lessons, prayers, and videos are provided by the Campus Ministry Office, and the usual Morning Prayer shared by students over the public address system is focused on specific Lasallian themes.  The life, times, work, and legacy of Saint John Baptist de La Salle are discussed, as well as the Lasallian Core Principles, and the impact of Lasallian education in current times.  Additionally, teachers share stories about their own teaching vocation with students during the week. 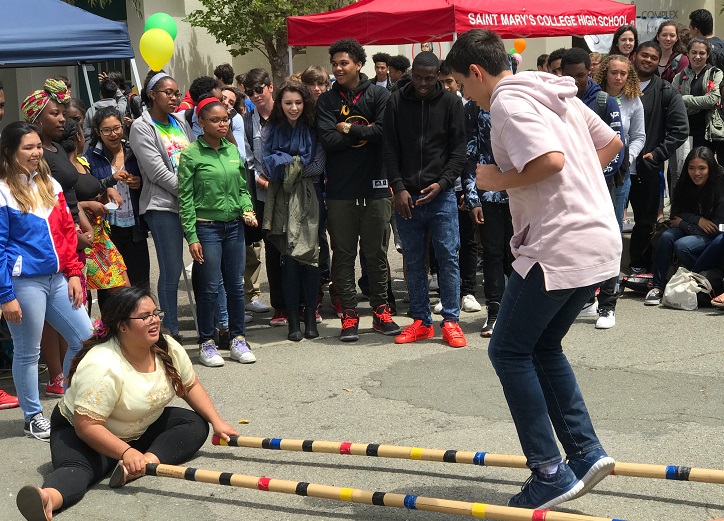 A key event during the week is the annual Diversity Fair, a true reflection of “Respect for All Persons” and “Inclusive Community.”  This year more than 30 countries and cultures were represented at display tables prepared by students and teachers.  Ethic music, dance, foods, and more filled the center of campus for the event, themed:  “The Faces of Saint Mary’s: One Voice, One Family, One Table.”

A distant beneficiary of Founder’s Week is sister school, Saint Mary’s in Nyeri, Kenya, as individual grade levels support the Lasallian Core Principle, “Concern for the Poor and Social Justice” with the annual Penny Wars!  In a race for class points, pennies are collected in buckets and the winning class is announced on Founder’s Day.  Proceeds help the Kenyan school with scholarships, uniforms, shoes, medical care, and school supplies.

The Founder’s Day celebration itself, on the Friday closest to De La Salle’s May 15 feast day, begins with freshman, sophomore, and junior class tours of the annual Senior Project displays in the gymnasium.  The evening before, senior class parents are on campus to enjoy the presentations.  Founder’s Day Mass follows mid-morning in the school auditorium, after which annual honors are given to the Lasallian Student and Lasallian Educator of the Year, as well as Years of Service mementoes to faculty and staff who have achieved increments of five years at the school.  In 2017, seven will receive 5, 10, and 15 Year plaques, two will receive 20 Year plaques, and four more will be honored with plaques marking 25, 30, 35, and 40 years at Saint Mary’s.  Four of the recipients are school alumni, five are parents of current students or alumni, and one is also an alumni grandparent! 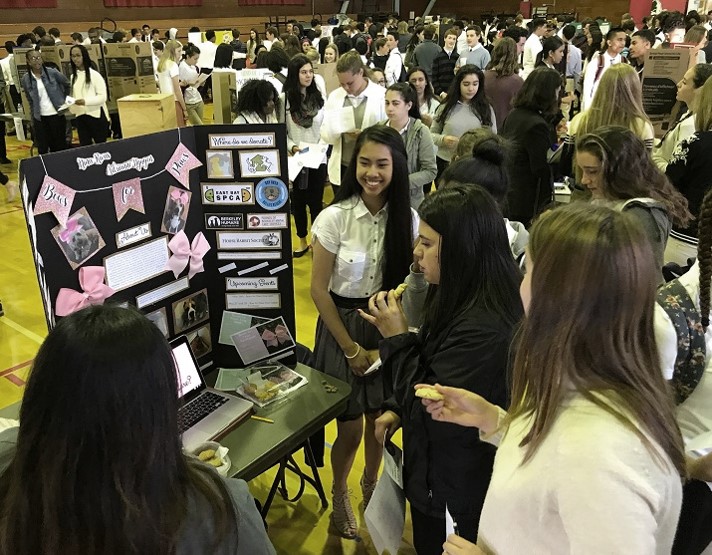 The “Dress-Up” dress code adjusts quickly after Mass, so that students can enjoy “Game Day” with an afternoon of community lunch, music, games, and activities around the campus and on the athletic field.  A highlight of Founder’s Day afternoon is the distribution of the school yearbook, which seniors receive the afternoon before.  Saint Mary’s Founder’s Week and Founder’s Day truly reflect the Lasallian spirit of community, honor Saint La Salle, and give witness to the vocation of teaching.