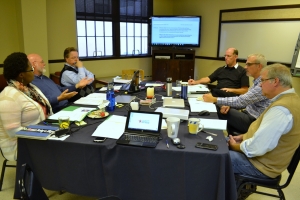 Discussions yielded a variety of observations and ideas regarding how District formation for mission panning could best move forward in responding to current needs and opportunities.  A synthesis statement was drafted to reflect the substance of the group’s discussions and serve as a first step in crafting a plan for enhanced Lasallian Mission formation in the District in the near future.

Think Tank participants met in a retreat-like setting in the old novitiate building at Mont La Salle, gathering for prayer and meals as well as for each day’s work.

According to Think Tank organizer Kopra, the group will continue to serve as the central planning committee for the future initiative planning and will take responsibility for the initiative’s final design.  He anticipates that other persons from District ministries will be consulted as the initiative is developed and implemented.