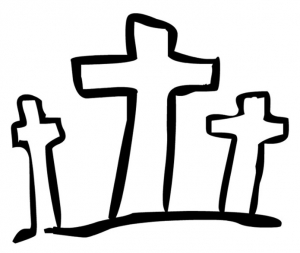 At daybreak on the first day of the week the women who had come from Galilee with Jesus took the spices they had prepared and went to the tomb.  They found the stone rolled away from the tomb; but when they entered, they did not find the body of the Lord Jesus.  While they were puzzling over this, behold, two men in dazzling garments appeared to them. They were terrified and bowed their faces to the ground.  They said to them, “Why do you seek the living one among the dead?  He is not here, but he has been raised.  Remember what he said to you while he was still in Galilee, that the Son of Man must be handed over to sinners and be crucified, and rise on the third day.”  And they remembered his words.  Then they returned from the tomb and announced all these things to the eleven and to all the others.  The women were Mary Magdalene, Joanna, and Mary the mother of James; the others who accompanied them also told this to the apostles, but their story seemed like nonsense and they did not believe them.  But Peter got up and ran to the tomb, bent down, and saw the burial cloths alone; then he went home amazed at what had happened.

Life is full of surprises.  Most of us have had the experience of being caught off guard by the unexpected.  Whether as small jolts or major earthquakes, surprises remind us that our sense of being in control is relative at best.  This includes God’s ways of being present to us.  While God’s presence is total and constant, it has an element of unpredictability that can challenge our notions of who he is and how he acts.  The question is: does this phenomenon have more to say about God or about us?  As it turns out, sometimes things that surprise us are things that should have come as no surprise at all.

A frequently overlooked element of being in God’s presence is to actually remember to be present ourselves.  There are times when we focus so much on our own desire to see or do certain things that it overwhelms our awareness.  God surrounds us and still we miss him.  Even as we stand in God’s midst, it is possible for us to act as if we are not.  We can choose not to be personally present, diverting our energy away from the moment so that even God’s own voice and strength do not register.  Presence as simply being in a location is one thing; presence as being in a personal relationship is quite another.

Such a lack of personal presence could have been the choice of the women at Jesus’ tomb, but it was not.  They tried neither to flee nor deny the moment.  By surrendering their control and being fully and transparently present, they were able to experience the surprise that awakened them from their grief and self-absorption and returned them to awareness of God’s redemptive presence.  Somehow, their days with Jesus had nurtured in them an understanding of how to live in readiness, neither presuming nor seeking control, but simply believing that God could and would always find them.

Thomas Merton wrote, “Just remaining quietly in the presence of God, listening to Him, being attentive to Him, requires a lot of courage and know-how.” The time of Lent is a time for improving our own ability to be present.  Our spiritual wholeness depends on our fidelity to our relationship with God, which depends on our willingness to mindfully be in his presence.  In many cases this means setting aside all of our schedules and scripts, and humbly giving ourselves to his time and space.  To know the God who saves, we have to allow ourselves to be attentive, and we have to allow ourselves to be surprised.

Eternal Father, so many times your Son surprised his followers by defying their expectations and showing them the power of your love.  Like them, we often have trouble accepting your Good News.  On this Holy Saturday, we pray that you will help our poor faith.  Free us to accept the gift of your salvation, living our lives with joy and confidence, and especially with compassion and justice.  This we ask of you who lives and reigns with your Son and the Holy Spirit, one God forever and ever.  Amen.