ARHS President to Step Down

Home/News/ARHS President to Step Down

ARHS President to Step Down 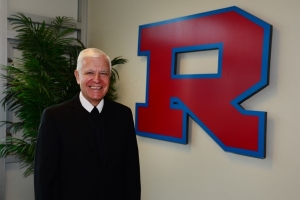 Archbishop Rummel High School President Brother Gale Condit, FSC, has announced that he will step down from that position effective June, 2016.  The announcement was made to the school community on March 10.

Brother Gale has also announced that he will assume the position of Development Director for the Lasallian Christian Brothers Foundation (LCBF) of the District of San Francisco New Orleans, effective July 12, 2016.

In making his announcement, Brother Gale, who has served as Archbishop Rummel’s President since 2012, said, “It has been an honor and a privilege for me to return to the school to help carry on the rich Lasallian tradition and vision established by many Christian Brothers and dedicated lay colleagues.   I am most grateful for having been given the opportunity to work with some very talented educators.   It has been a joy getting to know parents, faculty, staff, alumni and helping to guide students who all comprise the Archbishop Rummel High School community.”

Brother Donald Johanson, FSC, provincial of the San Francisco New Orleans District, added, “Brother Gale has the experience, expertise, and passion necessary to further meet this critical need of supporting Brothers no longer in active ministry.   I know that his daily presence and his leadership at Archbishop Rummel High School will be missed.”

Brother Gale began his professional career at Archbishop Rummel High School as a student-teacher in 1965. He eventually would serve in the school over eighteen years in various roles, including teacher, guidance counselor, Vice-President for Institutional Advancement, and most recently as President.

Superintendent of Catholic Schools Jan Lancaster commented, “Brother Gale Condit is the epitome of a Lasallian educator. He not only has a passion for academic excellence, but more importantly, he also brings the love of Christ to others in all that he does. He serves with the heart of Jesus. He will be missed. I wish him the best on his new endeavor.”

Under Brother Gale’s leadership, a revitalized Archbishop Rummel expended its curriculum to include an innovative Pre-Professional Program of courses in Biomedical Sciences, Engineering, and Law Studies.    At the same time, the school also was able to make significant repairs and improvements to its campus.

Commenting on Brother Gale’s tenure, Archbishop Gregory Aymond said, “I have a great deal of respect for Brother Gale and I will always remain grateful to him for responding to my invitation to serve as the President of Archbishop Rummel High School.   In recent years, he has done so much for the school and has continued to build on the Catholic Lasallian tradition.   Needless to say, we will miss him and will always remember him with gratitude.   He has certainly done the work of the Lord in his tenure as President and his fingerprints will be evident on Archbishop Rummel High School for many years to come.”