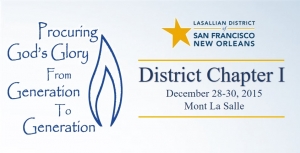 The inaugural District Chapter of the San Francisco New Orleans District was held December 28-30 at Mont La Salle in Napa, CA.  20 Delegates assembled for this canonical gathering of Brothers, which has as its theme, Procuring God’s Glory from Generation to Generation.

This was the first part of a two-part District Chapter, with the second part scheduled for December 28-30, 2016.  As stated in the Rule of the Brothers, “The District Chapter is convoked by the Brother Visitor.  It evaluates all aspects of the life of the District.  It takes into account the local situation and it establishes a schedule of precise programs for renewal, adaptation, or growth to be implemented in the near future.  Evaluation and the establishment of new programs are carried out in accordance with the directives and guidelines of the Church and of the Institute.” (Rule 137)

In his remarks at the Chapter’s opening session, Brother Donald Johanson, FSC, Visitor, commented, ““I was very happy to see the theme of the Chapter being, Procuring God’s Glory from Generation to Generation. To me, it calls to mind the essential consecration of us Brothers as articulated in our vow formula… I think it is important to remind ourselves of this consecration and always ask, ‘Are the deliberations and decisions of the Chapter procuring God’s Glory?’” 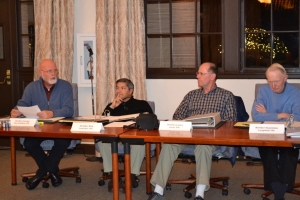 The Chapter included a combination of the organizational features from both of the former districts of San Francisco and New Orleans-Santa Fe.  Work was done both in plenary sessions and in meetings of four Chapter Committees on the areas of Community Life; Finance; Governance; and Critical Issues.

The three days of the Chapter produced plentiful and rich deliberations as the Brother Delegates considered various tasks and issues that exist for the Brothers and the District.  The resulting propositions that were crafted and submitted by the Chapter Committees reflected this range of challenges and opportunities that the Brother Delegates sought to address.  Several items were handled immediately, while others will require further input and consideration from the June 20-24, 2016 Mission Assembly and at the second part of the Chapter.  In the meantime, an interim report of Chapter propositions and decisions is being prepared for distribution to District Brothers and Partners.  The final Acts of this part of the Chapter will be published pending approval by Rome.

Throughout the Chapter, the Brother Delegates centered themselves through daily Mass, prayer services, and video reflections from numerous District Partners and students.  There also was ample time set aside for socializing and fellowship.

The Chapter Brother Delegates were: 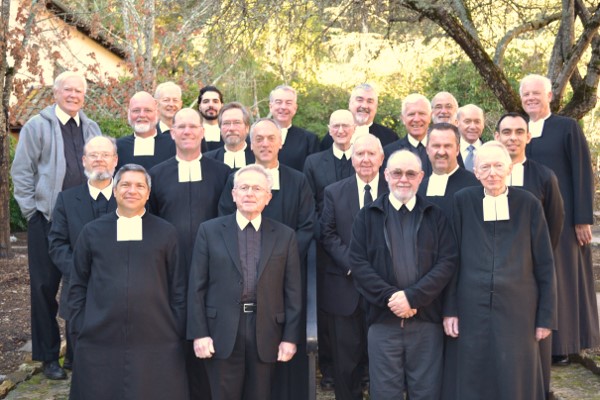 The Chapter also allowed for non-delegate Brothers to observe the procedings, and to have voice during plenary sessions and Committee meetings.  Brother observers were Brothers Patrick Moore, Peter Tripp, and Joseph Wright.