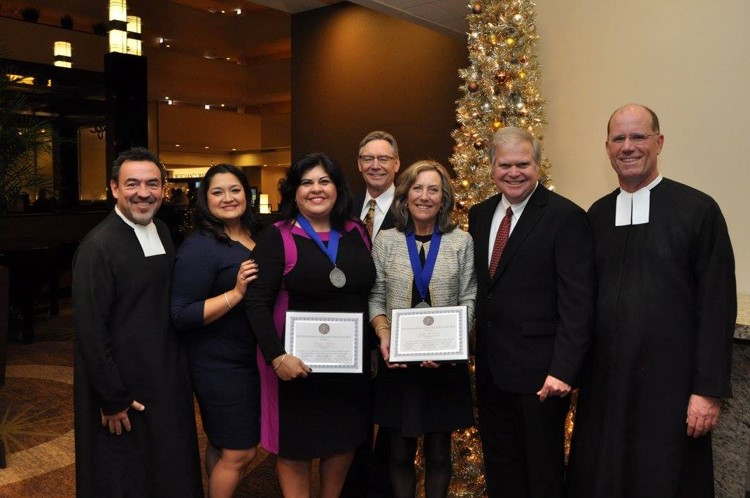 The District of San Francisco New Orleans’ 2015 Distinguished Lasallians Educator Award recipients were honored at the closing banquet of the Huether Lasallian Conference on November 22 in Chicago.

The annual Distinguished Lasallian Educator Award honors educators who exemplify the ideals of Saint John Baptist de La Salle, Patron of Christian Teachers of Youth.  The award is sponsored by Christian Brothers Conference and is presented in the name of all Lasallians of the Lasallian Region of North America (RELAN) to honorees from each of the RELAN Districts.

In nominating Ms. Modesto, Cathedral High School Principal Brother John Montgomery, FSC, noted her academic leadership, including her instrumental role in facilitating the school-wide adoption of educational technology.  He wrote, “(Her) passion is to work with students, teachers and administrators in the pursuit of high educational goals so the young men of the school – many of whom will be first generation college students – may attain their goal of graduating from both high school and college.”

Brother John also singled out Ms. Modesto’s impact in serving the school’s predominately Latino student body and community, writing, “As a bilingual Lasallian administrator, she is the point person in assisting students – many of whom are first generation college students – with attaining high educational standards to pursue their life-long dreams.  With special care in reaching out to all members of the school community, but particularly with Spanish-speaking parents, Sulema models the inclusive community at the heart of the school’s mission.”

Judy McCarty has begun her 19th year at Mullen High School, where she started as an art instructor and currently is chairperson of the Fine Arts Department, Lasallian Youth moderator, and Director of Service Learning.  She also has served as senior class moderator and yearbook advisor, and was a member of the former New Orleans-Santa Fe District’s Mission and Ministry Council, and of the 2014 Huether Lasallian Conference planning committee.

Mullen High School Principal Janell Kloosterman’s nomination of Ms. McCarty praised her gifts of creativity and dedication, saying, “Judy’s dedication to the Lasallian Mission has fostered community at every level of Mullen High School.  (She) is an exceptional example of the characteristics represented by this award:  integral part of the Lasallian educational community, personal devotion to the Lasallian mission and, most importantly, guiding hands and hearts in her relationship with students.”

Regarding Ms. McCarty’s professional contributions to the school, Kloosterman continued, “It was with Judy’s guidance that our Five Core Principles were first introduced to Mullen High School.  Under her leadership as Lasallian Youth Moderator and Director of Service Learning, Lasallian Youth grew from a small club of 5 students to more than 60 students. As Fine Arts Department Chairperson, Judy grew the curriculum has from four to ten classes in both the visual and performing arts.  Judy has been a member of the Mullen community for 19 years and in those years her accomplishments in building an educational community in the name of the Lasallian mission have been remarkable.”

Commenting earlier on the two Award recipients, Brother Donald Johanson, FSC, Visitor, wrote, “Sulema and Judy exemplify what is best in our District’s Lasallian educators, serving the mission with faith, passion, and excellence.  I am pleased that we have this opportunity to recognize and to thank them.”

The Region’s other Award recipients are Beth A. Lemme Bixby; Brother Raymond Meagher, FSC; and Elissa Pensa-Cerros of the District of Eastern North America, and Dr. Dennis H. Cremin; Patricia Norusis; and Brother Michael Rivers, FSC of the Midwest District.

Read more about all of the 2015 Distinguished Lasallian Educators at Christian Brothers Conference.